Mondays, except 24 Feb (the museum will be closed on Tuesday, 25 Feb)

Late Admission Tickets* (for entry after 17:00)

*Late admission tickets will be available from 17:00 at the ticketing counters in the museum. Please note that these tickets cannot be bought in advance (before 17:00). Late admission tickets are valid only on the day of purchase.
Admission is free for persons with disabilities and up to one accompanying caretaker. Please present the necessary documents.
Prices in the brackets indicate the cost for advance tickets and group tickets (for groups of more than 20 people), and for persons over 65 years old. Please present personal identification that reflect your birth date, such as your passport, health insurance card, or driving license.
Online ticket purchase is not available for special exhibitions. Please purchase tickets directly at the ticketing counter in the museum.

Introduction by the Curator
(English Translation)

Click here for information about events related to this exhibition 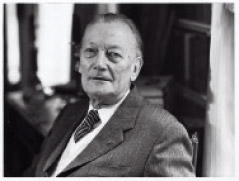 The Formation of the Grande Manière in the Seventeenth Century
Poussin, Le Brun, and the Royal Academy of Painting and Sculpture

The Royal Academy of Painting and Sculpture was founded in the seventeenth century, when France was under King Louis XIV’s rule. The Academy based its teachings on the paintings and theories of art put forth by painter Nicolas Poussin, who had spent most of his working life in Rome. This resulted in the birth of a distinctively French form of classicism that went on to have enduring influences on the styles of French art that followed it. This French classicism is sometimes known as the grande manière.

The Academy regarded history paintings—works which depicted scenes from classical Greek and Roman mythology and literature, as well as the Bible—as the highest genre of art. Prior to that, painters like Claude Lorrain had already developed the classical landscape, a vibrantly lyrical genre that blends elements of history painting into accurate portrayals of nature. It was upon this foundation that the painter Charles Le Brun, one of the Academy’s most influential figures, built its educational framework and established the French classical style.

Coriolanus Entreated by His Wife and His Mother
Nicolas Poussin

This exemplary history painting about the Roman general Coriolanus illustrates an ancient story about the strength of family bonds. Known as the “painter-philosopher,” Poussin believed that art should appeal not only to the eye, but also to the mind. 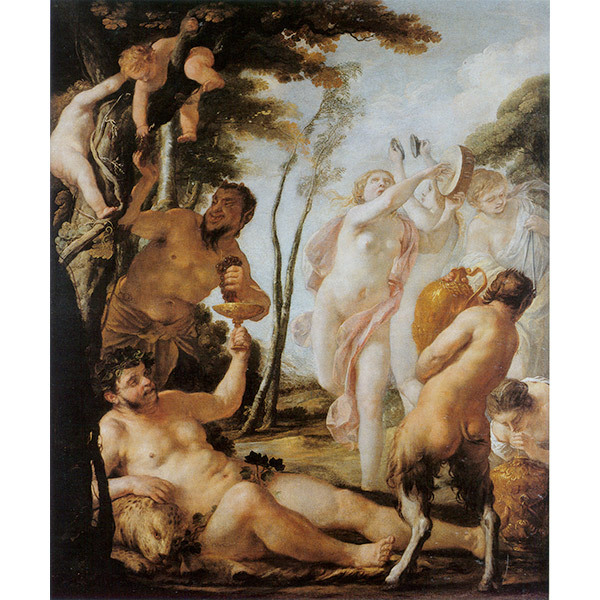 This lively painting depicts a ritual held in honor of Bacchus, the Roman god of wine and agriculture. Its painter, Blanchard, brought the colorful expressiveness of Italian paintings back to his home country, earning him the nickname, “the French Titian.” 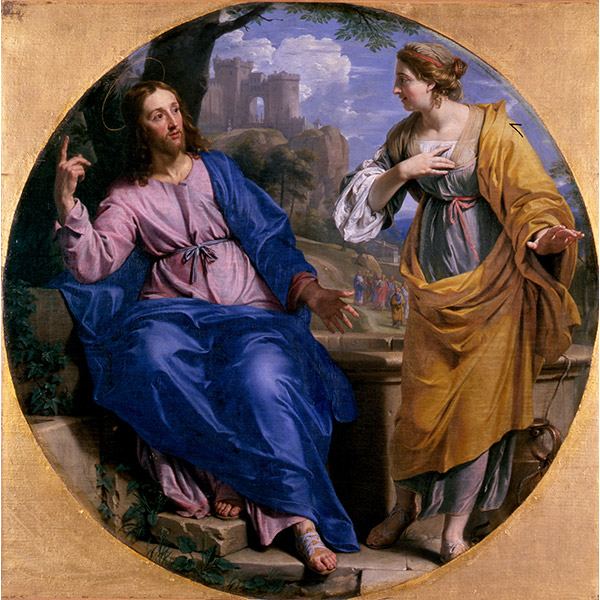 Champaigne painted this work for the Abbaye de Port-Royal des Champs, the abbey which his daughter was a nun of. It depicts Jesus asking a Samaritan woman for a drink of water. The artist was popular for his accurate portrayals of human figures, his vivid colors, and his lyrical landscapes.

In his later years, Louis XIV grew to favor art that was more intimate and sensual. This brought about the Rococo movement. Unlike classical artists, whose works were inspired by Greek and Roman classics as well as the Bible, Rococo painters like Antoine Watteau represented the subtleties of the heart through delicate and amorous worlds filled with rich color.

Demand for more straightforward and sensually arresting works emerged against a backdrop of economic prosperity, bringing Rococo art, as exemplified by the works of François Boucher, to its peak. The wealthy began to purchase art for themselves after visiting the Salon exhibitions hosted periodically at the Louvre Palace. This led to a rise in the popularity of portraits, genre paintings, and landscapes. The latter half of the eighteenth century also saw female painters such as Élisabeth-Louise Vigée Le Brun rise to prominence. 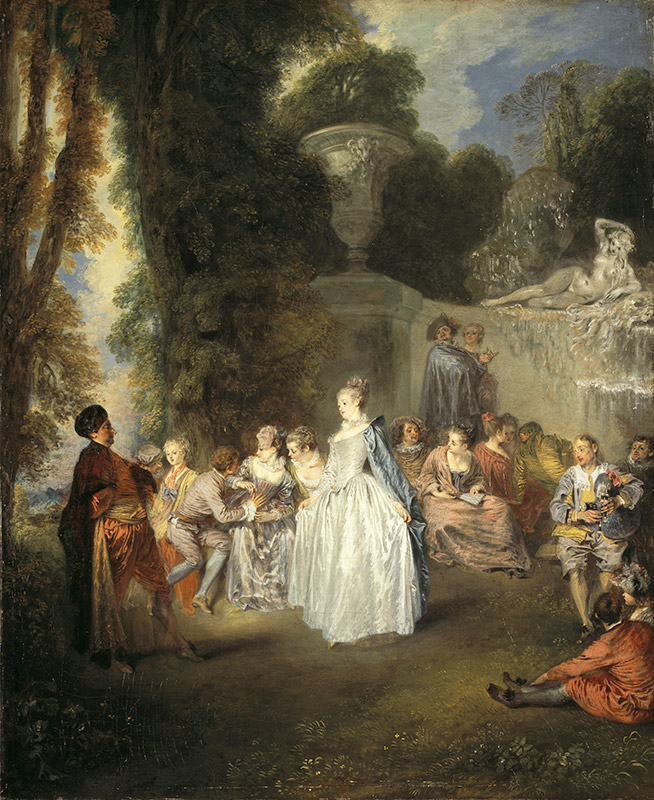 National Galleries of Scotland; bequest of Lady Murray of Henderland, 1861

Watteau developed the fête galante, a new genre of painting depicting festive scenes with aristocrats in outdoor settings. They often feature a garden, conversation, and music, painted in rich colors. The man playing the musette in this painting is the artist himself. 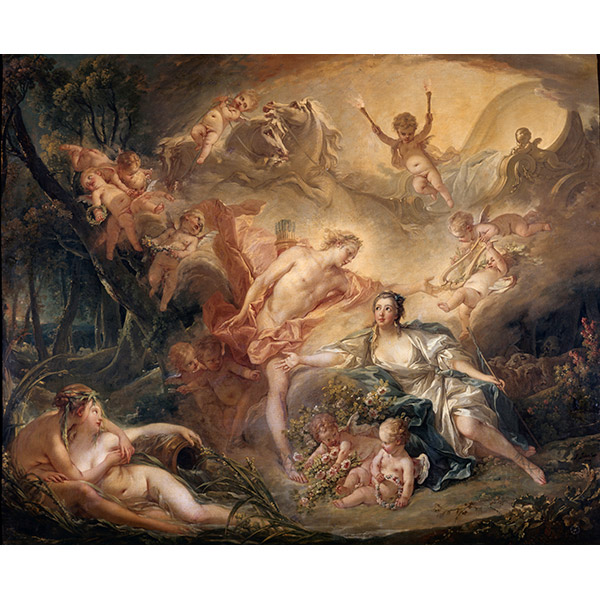 Apollo Revealing His Divinity to the Shepherdess Isse
François Boucher

Boucher, one of the most representative of Rococo artists, conceived this painting based on Madame de Pompadour’s portrayal of Issé in the similarly titled French opéra-ballet. 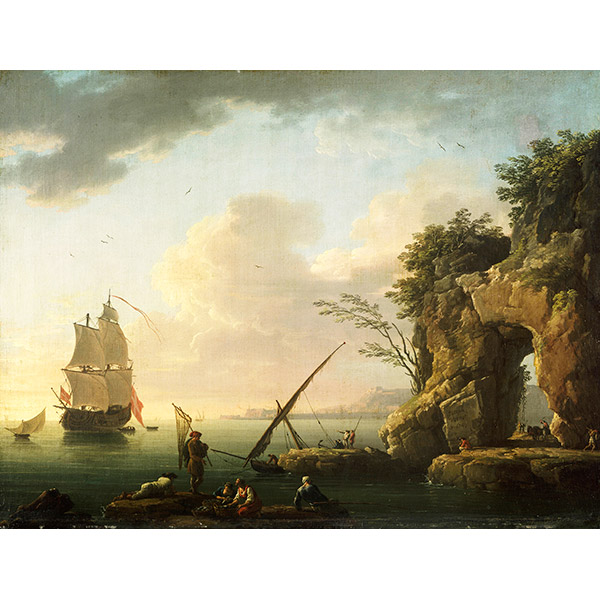 Having resided in Rome for around twenty years, Vernet brought innovation to decorative and fantastical Rococo landscape paintings by incorporating accurate portrayals of nature into them. This lyrical painting of a fisherman and his family is an example of such. 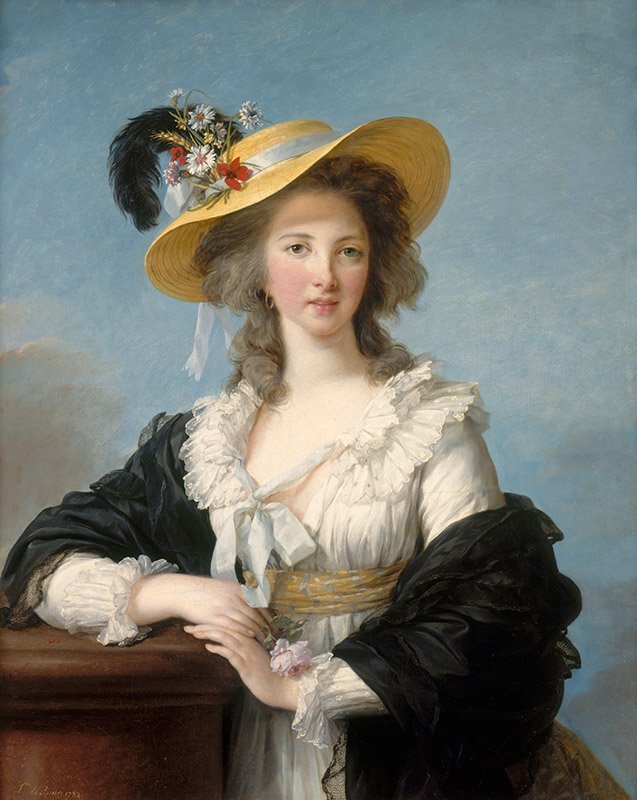 The numerous excavations of Pompeii and other Roman ruins around the mid-eighteenth century inspired fresh interest in classical civilizations. This coincided with increasing criticism of Rococo art for being sensuous and superficial, giving rise to the Neoclassical movement.

Napoleon’s campaigns in Egypt and Syria at that time exposed the people of France to unfamiliar cultures, advancing a contrasting yet equally influential art movement in France: Romanticism. This contact with new cultures inspired Romantic artists to begin exploring new themes in their art, such as contemporary subjects, and even the realms of insanity and unconsciousness.

After the French Revolution, art education was led by the restructured Academy of Fine Arts, which sought to train the next generation of artists to carry on the well-established French classical style. This resulted in the emergence of academic painters who highly valued drawing, and strongly advocated licked finishes—smoothed surfaces that show no obvious brushstrokes—in painting. 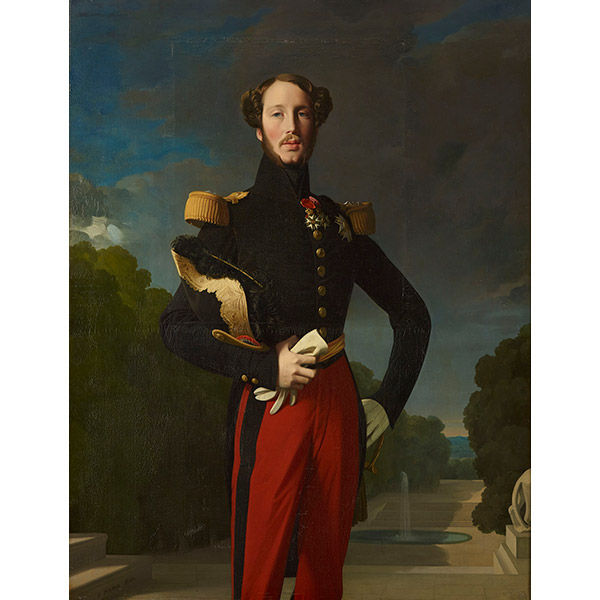 Ferdinand-Philippe, Duke of Orléans, Set against a Landscape
Jean-Auguste-Dominique Ingres

Ingres’s paintings feature both accurate forms and disproportionate features that are created by curved lines. In the case of this painting, the Duke’s neck and arms are portrayed to be unusually long. 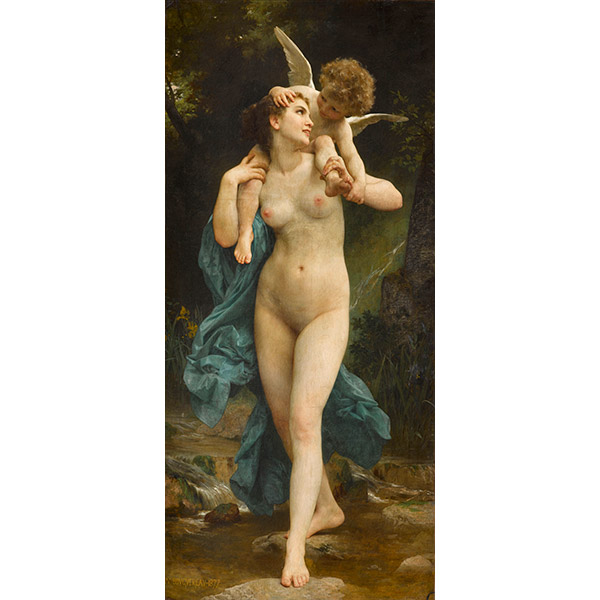 Bouguereau created many paintings of naked women under the guise of painting figures from mythology and literature. This made him the target of much criticism, but also made his paintings popular. The young woman carrying Cupid on her shoulders represents youth. The Academy considered it an artist’s mission to create idealized depictions of beauty with a licked finish. 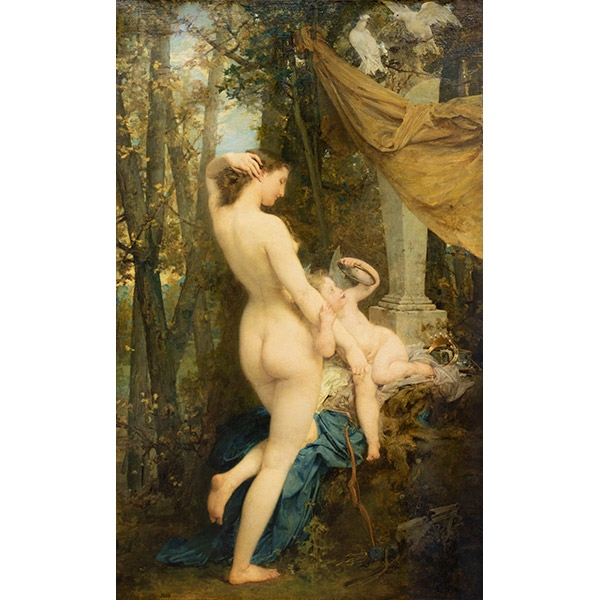 The Toilette of Venus
Paul Baudry

The principles of the French classical style permitted depictions of nude female figures, as long as they were based on stories from mythology or the Bible. Nineteenth-century Neoclassical artists inheriting that style also made many such paintings. This painting of Venus against a landscape was well received by critics.

This painting from Manet’s later years depicts a woman strolling through a garden in the outskirts of Paris. Manet’s use of distinctively Impressionistic brushstrokes and his choice of a contemporary subject demonstrate his rebellion against the academism promoted by the Academy. His use of black, a color Impressionists avoided, also hints to his admiration for Spanish paintings.

This section features 17 exemplary drawings from the British Museum and the Louvre, 16 of which are on display in Japan for the first time. Artists create drawings not only as preparation or studies for finished works (oil paintings) or as records of their plans and ideas, but also as training to master painting techniques. Although normally rendered in charcoal on paper, many Rococo artists like Watteau created masterful drawings using white, black, and red chalks. 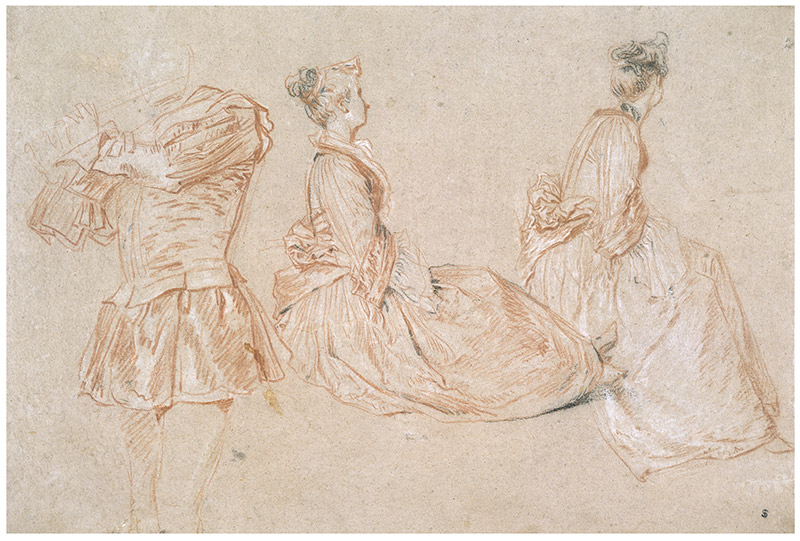 © The Trustees of the British Museum

Watteau, a lover of music and the theater, is said to have used this drawing to plan for his paintings. The lack of a head on the male figure on the left tells us that he was paying more attention to depicting the flautist’s gestures. This figure appears in a few of Watteau’s oil paintings.

Regarding photography in the exhibition hall

Photography is permitted only for the following two works: Venetian Feasts and Gabrielle Yolande Claude Martine de Polastron, Duchess of Polignac. The use of flash and tripods is prohibited.

This event has been canceled.

In order to prevent further spread of the COVID-19 coronavirus, this event has been canceled. We apologize for the inconvenience, and we seek your understanding and cooperation. 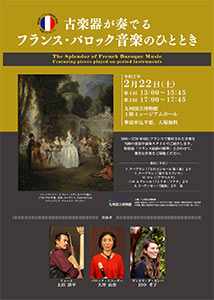 Come on down to Kyushu National Museum for an afternoon of French Baroque music, featuring seventeenth- to eighteenth-century pieces played on the instruments of that era! 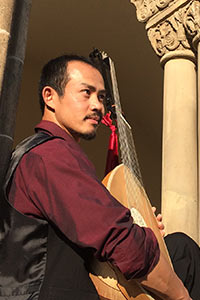 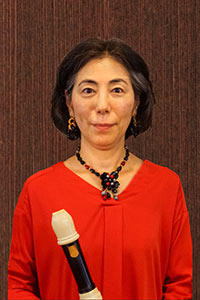 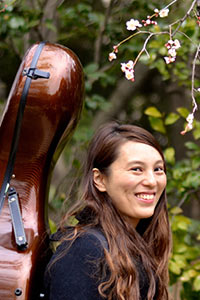 Admission is free of charge. Registration not required.