The theme is "Ocean Ways, Asian Paths". Visitors get to experience the dramatic history of how Japan progressed amidst its interactions with Asia and Europe.

Kyushu was an important stage for international interactions since ancient times. This was due to its geographical proximity to continental Asia and the Korean Peninsula. Kyushu National Museum uses the concept of “understanding the formation of Japanese culture from the Asian historical perspective” as the basis for Cultural Exchange Exhibition (permanent exhibition; around 3,900m2 floor area). It introduces the history of cultural exchange between Japan and Asia.
The exhibition shows five themes, from the Paleolithic period to the end of the early modern period (when Japan opened its borders). The gallery comprises of the “main exhibition area”, which displays the objects representing the cultural exchange of each period, and 11 surrounding exhibition rooms.
Exhibits in some display cases are changed almost every week to constantly offer fresh content. “Touchable objects” and impressive super high-definition videos heighten the realistic experience of the exhibition. 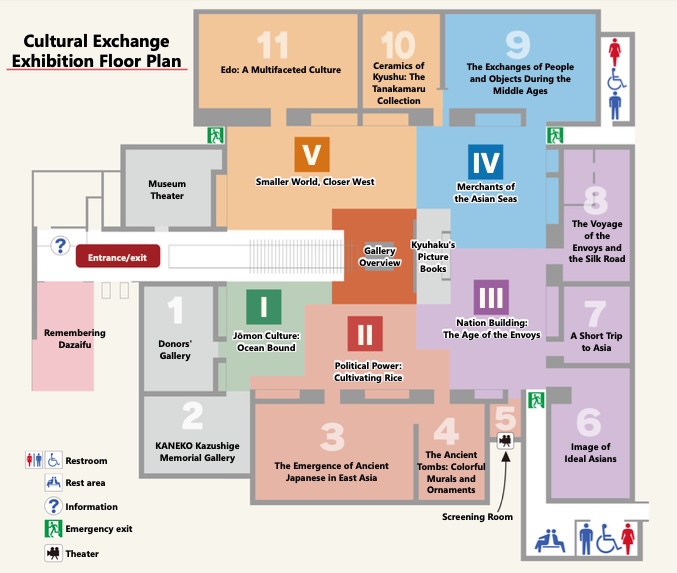 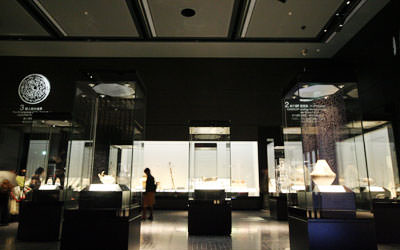 I Jomon Culture: Ocean-Bound Between 35,000 years ago and the 4th century B.C.

In the Paleolithic period of Ice Age, people hunted large animals, gathered plants, and lived a nomadic life. In the Jomon period, the climate turned warmer, forests grew abundant with nuts and berries, small animals came into existence, and the sea became rich with fish. People made earthenware to cook food, settled in one place, decorated their surroundings, offered prayers, and held funerals. In particular, culture flourished in East Japan, thanks to the abundance of food such as salmon. 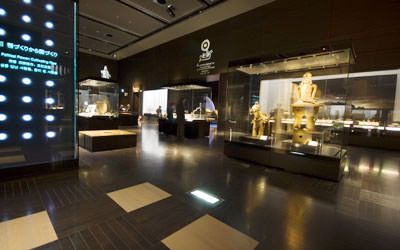 In the Yayoi period, rice cultivation and metalwork were introduced to Kyushu from the Asian continent. Individuals who grew to become leaders had appeared among farmers who collaborated with each other, and eventually ruled their regions as kings. An Okimi (Great King) came into being in the Kofun period, who ruled most of the Japanese Islands. Many people crossed the sea from the Asian continent to the Japanese Islands, introducing the culture of horseback riding and Sue pottery manufacturing techniques. In Kyushu, a unique Kofun culture developed, in which people prayed for their chief’s peace after death with sekijin (human-shaped stone carvings) and decorative murals. 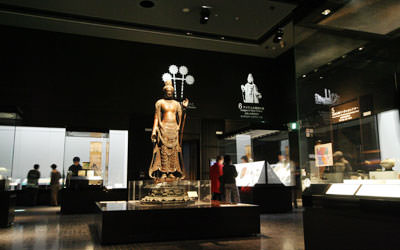 III Nation Building: The Age of the Envoys Between the 7th and 12th centuries

In the Nara period, Japanese envoys were sent to Chang’an, the capital of the Tang dynasty, to study the nation’s advanced governmental system and Buddhism, and brought back exquisite foreign products. Dazaifu prospered as the hub for diplomacy and trade with other Asian countries. In the Heian period, the kana script that came to be known as representative of Japanese culture, was developed based on imported culture. Esoteric Buddhism and the belief in rebirth in the Western Paradise of Amida Buddha were popular, and many sutra mounds were built to pass on sutras to the future generations. 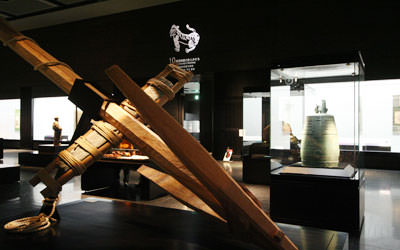 Between the Kamakura period known for the emergence of samurai and the Muromachi period, merchants of Asian countries frequently sailed across the vast sea. Commerce developed in many regions, especially in the cities including Kyoto and Hakata. Among the samurai who fought for supremacy, ink wash paintings and tea that were introduced by Zen priests, which later developed into the well-known Japanese traditional culture of the Way of Tea, were popular as symbols of wealth and power. 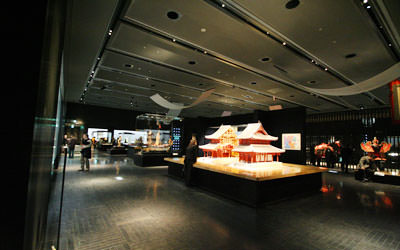 The years between the end of the Muromachi period and the Azuchi-Momoyama period correspond to the European Age of Discovery. Interactions with Europeans who ventured into Asia brought guns and Christianity to Japan, while silver and artisan crafts from Japan crossed the sea. In the Edo period where wars ended and brought about peace in society, Japan connected with the world through Nagasaki, Tsushima Island, Ryukyu, and Ezochi. While Japanese porcelain and lacquerware enthralled the world, information about the world spread across Japan and developed various cultures such as rangaku (Dutch studies), which formed the foundation for a modern Japanese society.

One important mission of a museum is to preserve cultural properties for posterity. Exhibits in this room show Kyushu National Museum’s activities to conserve and restore cultural objects, and conserve the natural environment.

Mr. Kazushige Kaneko donated 1,171 valuable Asian ethnographic objects to the Museum since its opening. The gallery showcases the quintessence of the diverse and rich everyday cultures nurtured in Asia.

In Northern Kyushu during the Yayoi period, rice cultivation ̶ which became one of the foundations of Japanese culture ̶ and goods such as metal objects were brought and traded. Excavated objects are mainly displayed to introduce the techniques and thought that supported the nation-building of Japan.

Haniwa (clay figures) and stone figures placed at the outer circumferences of kofun (ancient tombs) bore witness to history in the making during the kofun period. This area displays the photos and replicas of splendid kofun mural drawings. These decorative drawings reflect the kofun culture in northern and central Kyushu.

Access into the ornamented kofun (ancient tombs) has been limited. The inner areas of the kofun have been filmed with the latest technology. This theatre brings to viewers the realistic experience of entering an actual stone chamber and seeing the decorative murals. (Film screening every 15 minutes interval. Visitors are free to enter the room anytime.)

3 Nation Building: The Age of the Envoys

Visitors can take their time to enjoy and learn about the various worlds of Buddhist art and its development in Asia, such as elegant and dignified Buddhist sculptures and paintings.

Without focusing on any specific countries, regions, or time period, this exhibition room is mainly composed of the collections of Kyushu National Museum. The room is designed to offer the feeling of a leisurely walk through Asia.

This interactive exhibition room displays replicas of the cargos of the envoys to Tang-dynasty China. Excavated objects from the Eurasia region are used to introduce the trades that occurred around areas adored by the envoys‒ Changan and the Silk Road.

4 Merchants of the Asian Seas

Exhibition Room 9 Interaction of People and Goods in Medieval Asia

This area highlights the historical development and cultures of Asian countries through the similarities and differences of the artwork and historical materials.

Do look through the range of fine objects on display. These are the Kyushu ceramics collected by Mr. Zenpachi Tanakamaru, who was a businessperson and famed expert in ceramics collection.

This room displays the various fine art and craftwork that shows the elegant and multifaceted development of the Edo period. Highlights include objects from the cultural exchanges in Nagasaki and Ryukyu.