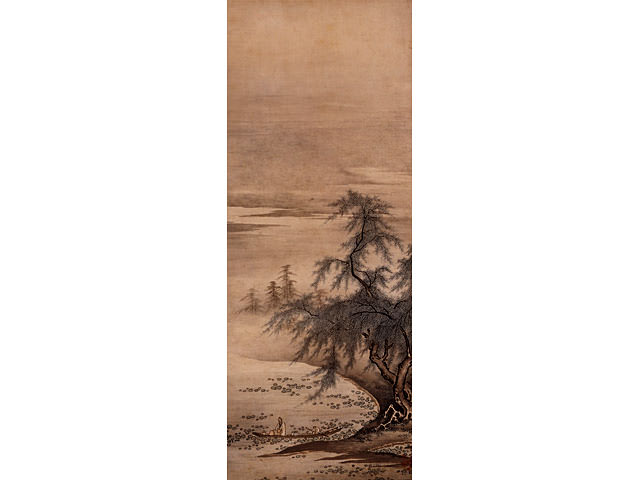 KANO Masanobu (1434-1530), a leading painter and contemporary of Sesshu in the Muromachi period, was the first generation of the Kano school that dominated the traditional Japanese painting scene until the beginning of the Meiji period. He played an active part as a personal painter for Muromachi government’s 8th General Yoshimasa Ashikaga. This work is a masterpiece of India-ink drawing, representing Higashiyama culture in the latter half in the 15th century, and the only piece of KANO’s that was designated as a National Treasure. A ship and two people drifting among lotuses are drawn. The person to the left is the lotus-loving Confucianism master in Beisong, Shu Moshuku (1017-1073). Intellectuals of the Muromachi period had deeply admired Chinese culture and produced many pictures based on a Chinese history. 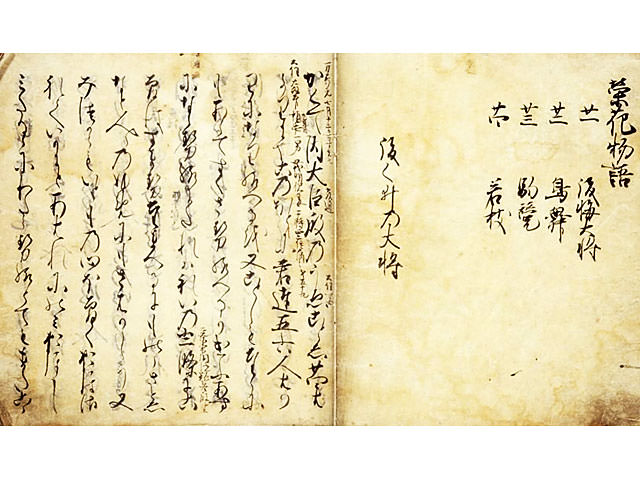 This is the oldest manuscript that was designated as a National Treasure. A Tale of Flowering Fortunes is Japan’s first historical novel written in kana about the 15 generations of the Imperial Court, chronicling Emperor UDA in the early Heian period to Emperor HORIKAWA’s reign for about 200 years. The excerpt describing the luxurious life of Prime Minister FUJIWARA Michinaga is famous, and is also called “the story of prosperity” or “the chronicles of Imperial succession.” 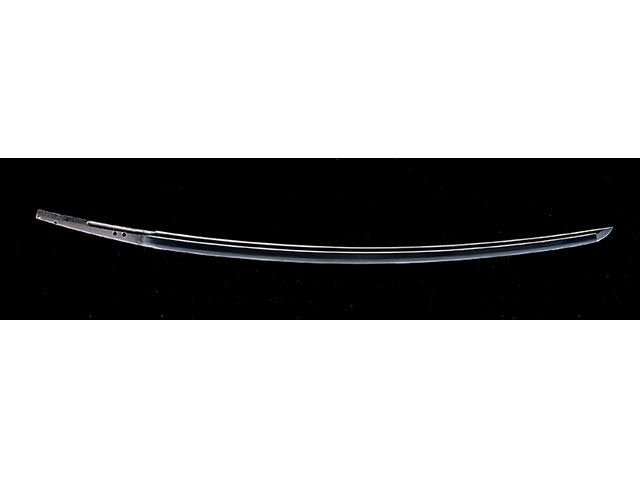 The sword was forged by swordsmith Rai Kunimitsu in Yamashiro village (Kyoto). This is the best work of Kunimitsu. Of all his swords, two were designated National Treasures, and 22 were Important Cultural Properties. Forging a straight blade is the Kunimitsu’s speciality. The blade widens slightly where it curves in the center, giving a dignified impression. MATSUDAIRA Shimousanokami Tadaakira, a daimyo of the early Edo period, inherited the sword as the adopted child of Tokugawa Ieyasu, and had thereafter passed it down through his family for generations. In Meiji period, the sword became the property of YAMAGATA Aritomo, before finally being dedicated the Meiji Emperor during his royal visit to Yamagata in 1885. 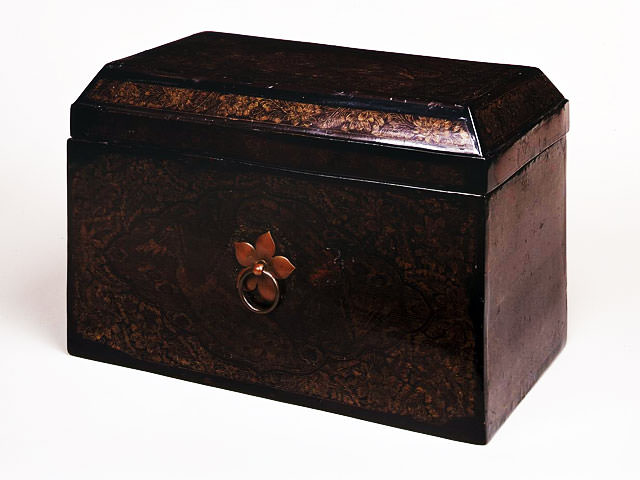 It was produced in Zhejiang, Hangzhou during the Yuan dynasty (1315) to keep Buddhist scriptures. In the same period, three similar Important Cultural Properties were inherited by Seiganji temple in Fukuoka. Chinese lacquerware techniques were studied and developed during the Muromachi period where lacquer ware with gold inlay became increasingly popular. This artifact is a valuable artwork that represents the Chinese-Japan cultural exchange of that period. 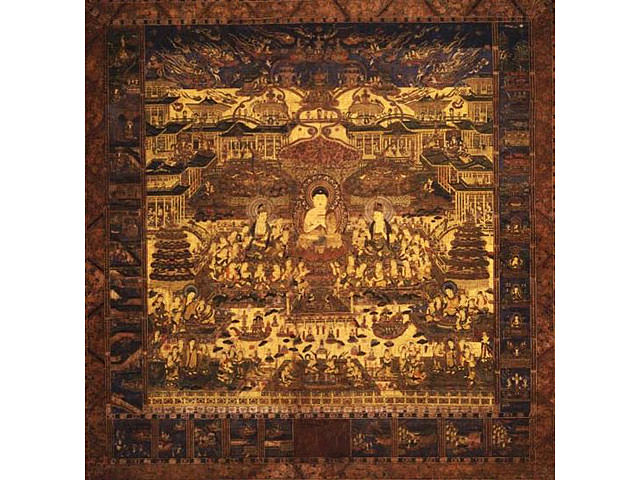 It is a painting of Western Pure Land painted in the Kamakura period. The center of the painting depicts Amitabha Tathagata and two Bodhisattvas, Kannon and Seishi, while various Bodhisattvas and people are situated on the left and right. A lofty building with corridors is depicted in the background while the pond full of lotus flowers is in the foreground, and depicted in the center is the Amitabha Tathagata preaching about the Land of Happiness. 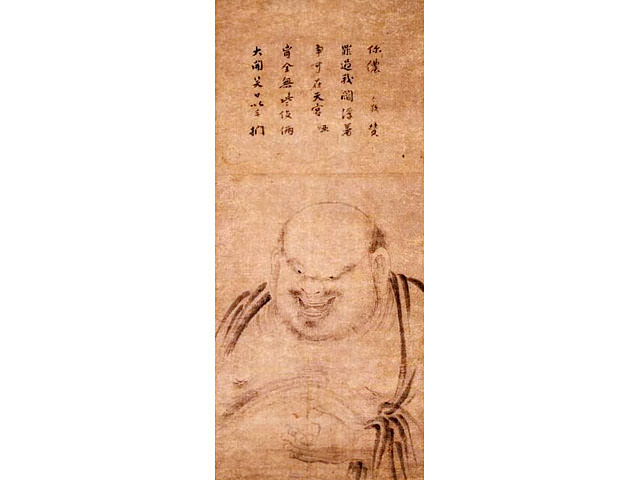 It is a famous Chinese painting by monk painter, Mokkei (13th century), based on a real person, Budai, who was believed to be an incarnation of Maitreya from about 1000 years ago. He is depicted with a smiling round face, piggish nose, and a potbelly. A poem on the anecdote of Budai is penned by the Chinese monk, Kanokyokei (13th century) above the portrait. 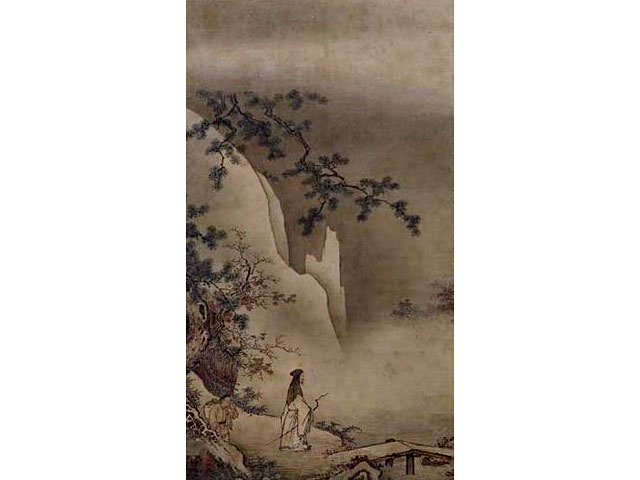 This is a winter scenery painted by the first generation of the Kano school, KANO Masanobu, depicting the ideal Chinese literati in the Muromachi period. It illustrates the popular style of Chinese painting in the past, depicted with hills and rivers. This form of expression is similar to BA En’s preferred style, a court painter in Nansong. 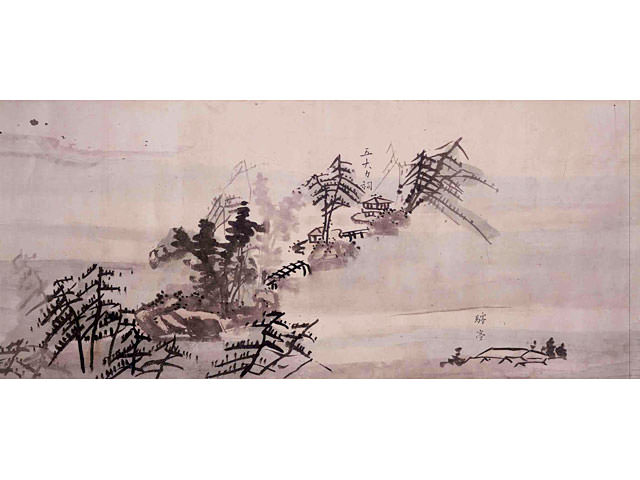 IKENO Taiga (1723-1776) painted in the Japanese art style called “Nanga.” This painting illustrates a picturesque scenery of Matsushima in Mutsu area. It expresses the sensitivity of a painter who used to play in Matsushima. It was drawn in 1749 (Kanen 2) during his travels in Kanazawa. 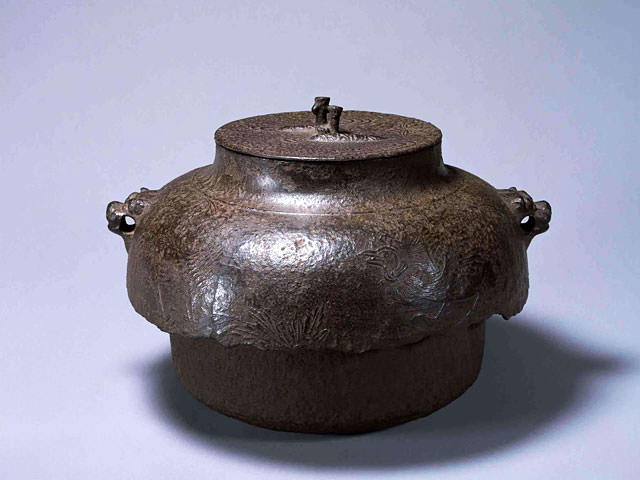 This pot made for tea ceremony was casted by the metalsmith who lived near the mouth of the Ongagawa river in Fukuoka in the early Muromachi period. One side is decorated with a maple leaf and two cocks while the other side is decorated with maple leaves in a flowing river, and the bottom of the kettle is depicted with a sandy beach. This design is called “Tatsutagawa”. This artifact is the biggest kettle amongst similar cultural properties. 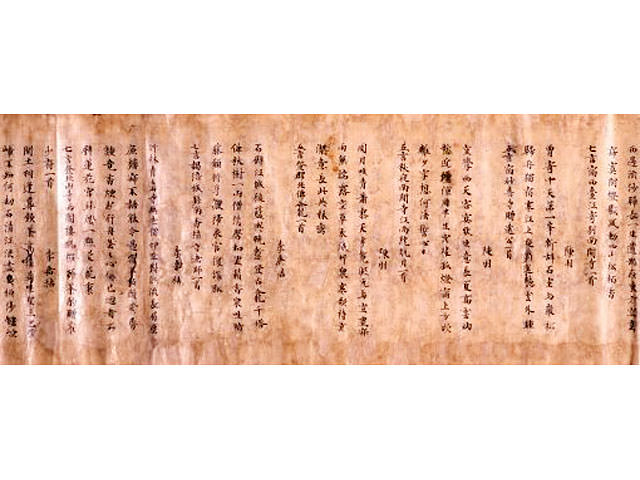 Important Cultural PropertyPages from the Anthology of Chinese Poems

This is part of a collection of Chinese poetry brought from Tang China during the Heian period. It contains 27 poems about monks and temples dated early to middle Tang period, and Sokutenmoji system established by Sokutenbuko empress is used in these poems. A line of poetry composed by Hakkyoi, who was popular in Japan at that time, is copied on the back with in his idiosyncratic brushwork. It is a precious memento reflecting the popularity of Chinese poetry in Japan. 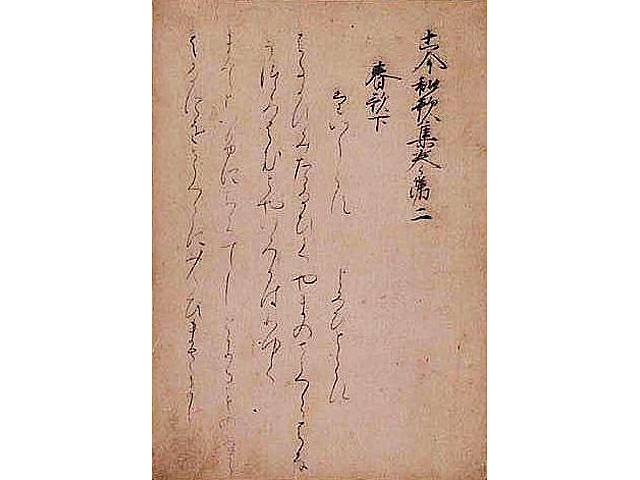 Written by KINO Tsurayuki, this collection contains a total of 39 poems, penned on 17 pages, from the 2nd and 4th volumes. The collection of 31-syllable Japanese poetry was inherited by the Matsudairas who were Kameyama’s feudal lord in Tanba (Kyoto). Each piece of writing paper has a design of clouds and sprinkled mica. The calligraphy style is delicate yet simple, skilfully flowing from one line to the other. 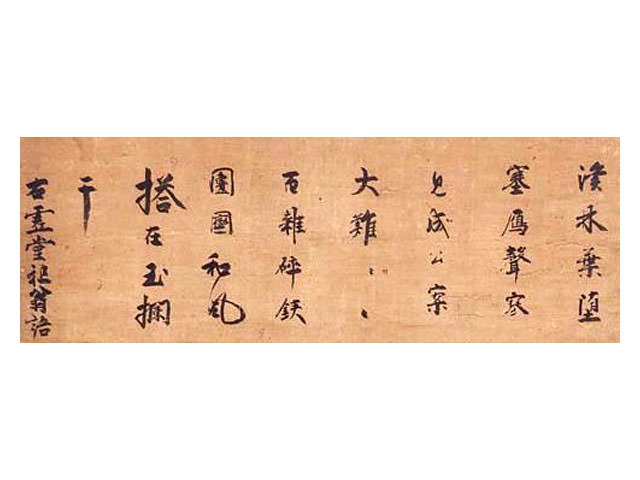 This is a masterpiece written by Shuhomyocho (1282-1337), who was the Emperor’s private monk. This style is known as “Kogarashi handwriting.” The Buddhist sermons were written by Kidochigu (1185-1269), a learned and virtuous priest of Nansong. It shows that Buddhism is difficult to understand. 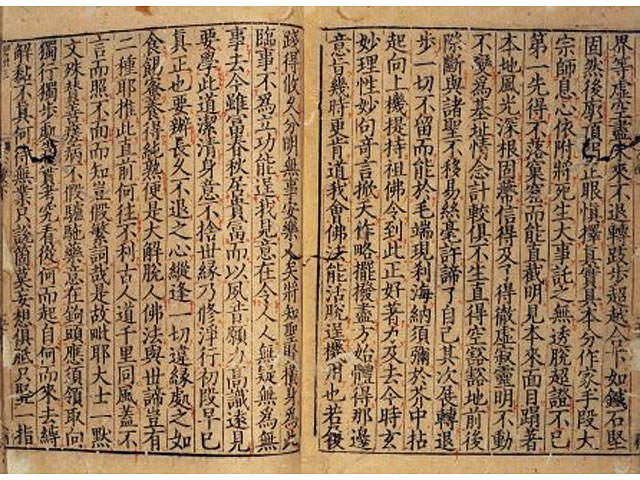 Shibun, a pupil of famous Chinese monk Engokokugon, was known as the author of "Hekiganroku." It consists of two volumes and was reprinted in 1238. There are guiding marks for rendering Chinese into Japanese during the Kamakura period. Memos made by a Zen priest during the Muromachi period is also seen. It is a precious book published in the Song dynasty, and it had great influence on Japanese version. 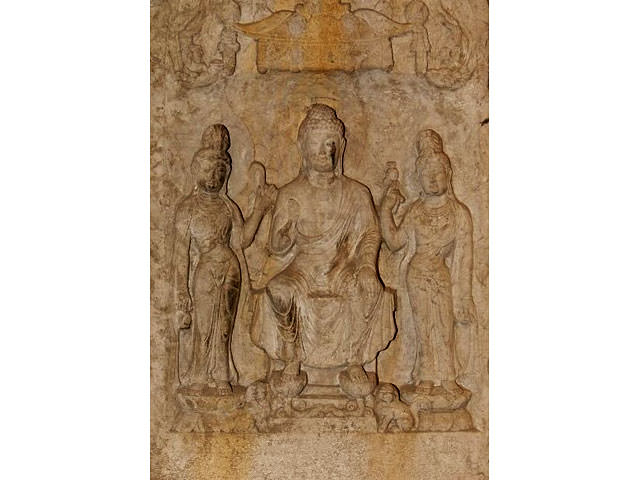 A sitting Buddha is in the center. It is one of the stone Buddha statues that decorated the inner wall of a temple in Chang’an, China. It used to be a part of the cloisonne flower table decoration in a temple constructed under the orders of the Sokutenbuko empress in 703 or 704, Tang period. The left and right images of Tathagata and standing Bodhisattva were carved in the cave. It is one of the mementos representing a Tang period Buddhist sculpture. 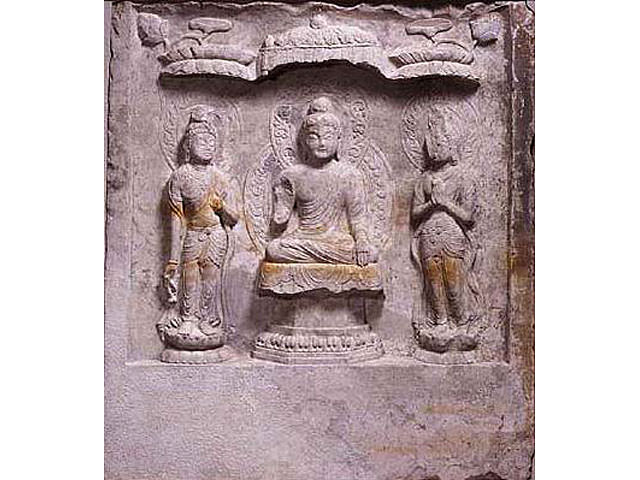 A Buddha in seated meditation is carved in the center. It is one of the stone Buddha statues that decorated in the inner wall of the Chang’an temple in China It used to be a part of the cloisonne flower table decoration in a temple constructed under the orders of the Sokutenbuko empress in 703 or 704, Tang period. The left and right images of Tathagata and standing Bodhisattva were carved in the cave. It is one of the mementos representing a Tang period Buddhist sculpture. 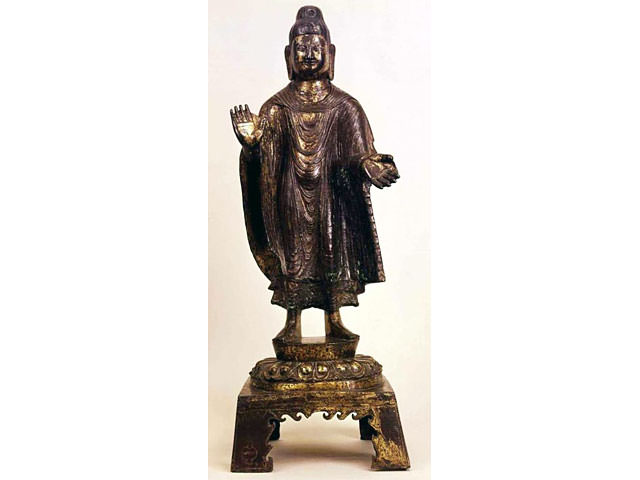 It is a large-scale bronze Buddhist image made in 443, North Wei, China. The smiling expression and its formal costume was characteristic of that era, but the curled hair and strong muscular body illustrates influence from the west. It is an important artifact that shows a change in the style of Chinese Buddhist sculptures. 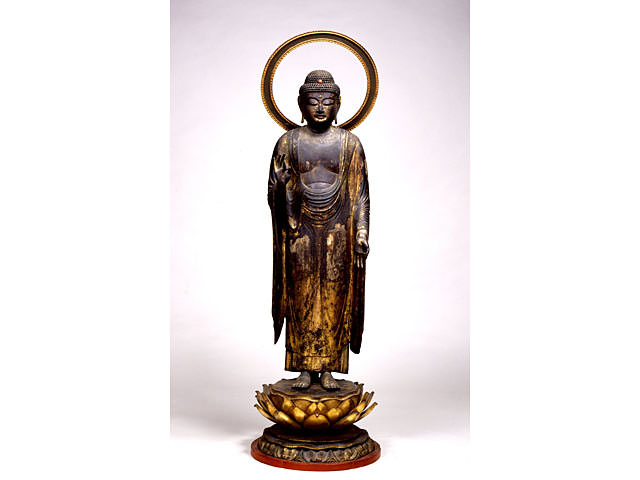 This image of Amitabha is a masterpiece, measuring 3 shaku (about 91 cm) in height. Amitabha images of 3 shaku were actively made in the Kamakura period, but there are few examples that dates back to the Heian period, making it highly valuable. The facial features showing a mild expression and its detailed costume are thought to be produced by a master craftsman of Buddhist image. He inherited the style of Teicho who produced Amitabha images for the Byodoin temple in Kyoto. This image used to belonged to Genmeiin temple in Kameoka city, Kyoto. 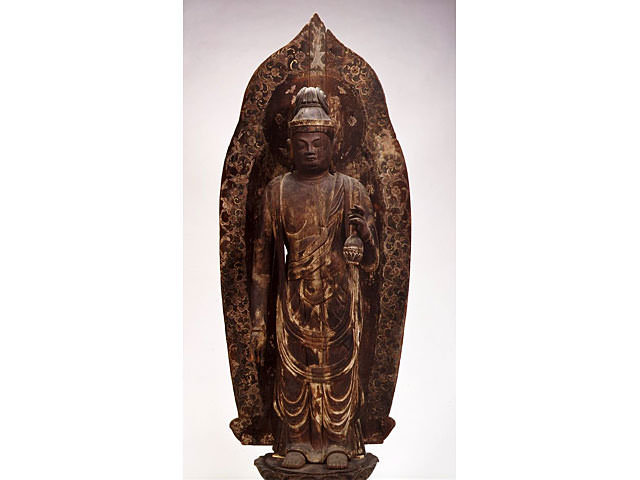 A life size Kannon image carved from one single lumber of the Japanese nutmeg tree that is made in the Heian period (10th century). The expressive facial features and nimbus is characteristic of the Nara style, but is also thought to have influence from the styles in Kyoto. This sculpture is valuable as it reflects Heian sculpture style. 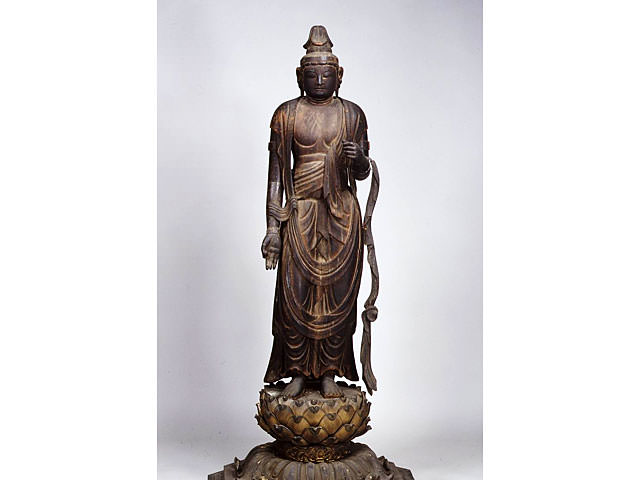 It was originally an image of Kannon with eleven faces carved from one single lumber of the Japanese nutmeg tree. The expressive facial features and sword holding posture are made in the typical Heian style. It belonged to Seiwain temple in Kamigyoku, Kyoto, which gathered many devotees. 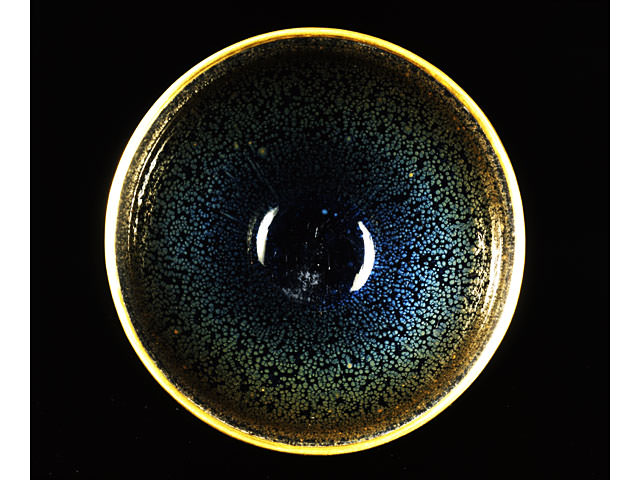 This bowl made in Kenyo (southern China) in 12th to 13th century, is called Tenmoku because of the design that looked like oil spots on its surface. Firing in a kiln of high temperature coincidentally created this design. The gradual change in colour from the bottom to the top edge is exquisite, making it highly valuable. 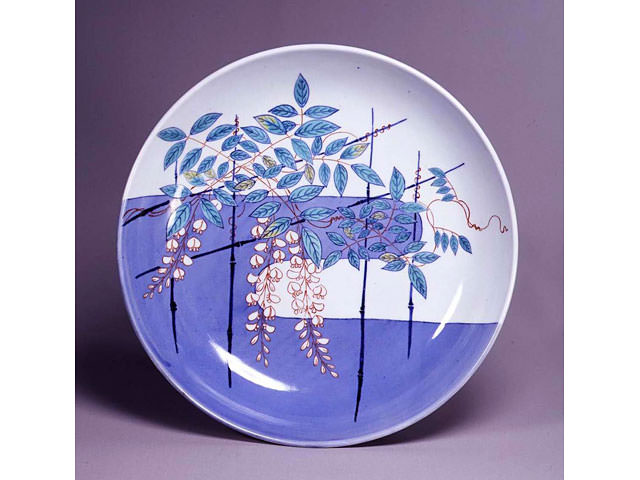 The bold design of wisteria trellis painted in the Nabeshima style reflects the skill of early modern Kyushu ceramics. The wisteria motif comes from The Tale of Genji and the blue colour gives it a sense of freshness. The flower design was popularly used in works made in the 17th century. 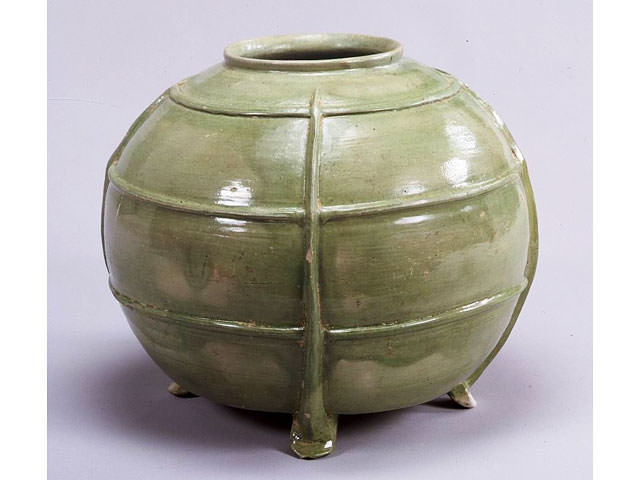 A typical single colour glazed earthenware of 9th century Nara period. While pots with four feet are not conventionally made, this vessel is a masterpiece that showed the development of Japanese ceramic style since the introduction of Chinese celadon porcelain. 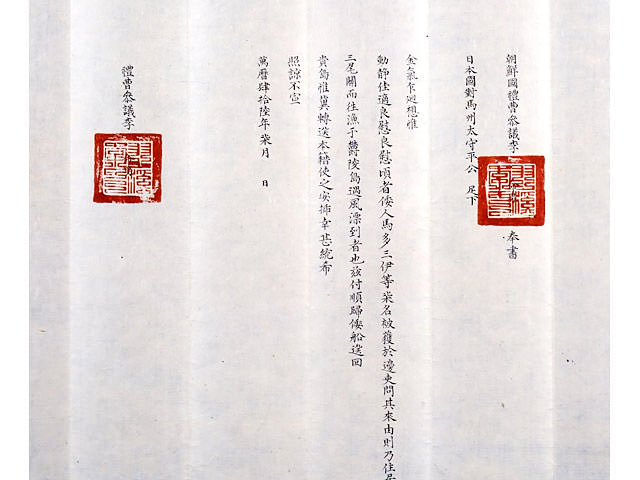 These documents written by the daimyo were handed down to the So clan in Tsushima (Nagasaki). There are about a total of 14,000 items, including a letter from a member of the Shogun's Council of Elders. It also contains falsified documents by the Korean ruler, allowing the Tsushima clan to continue cordial diplomatic relations with the states in the Korean Peninsula. This document reveals the relations between Japan and Korea in early modern times. 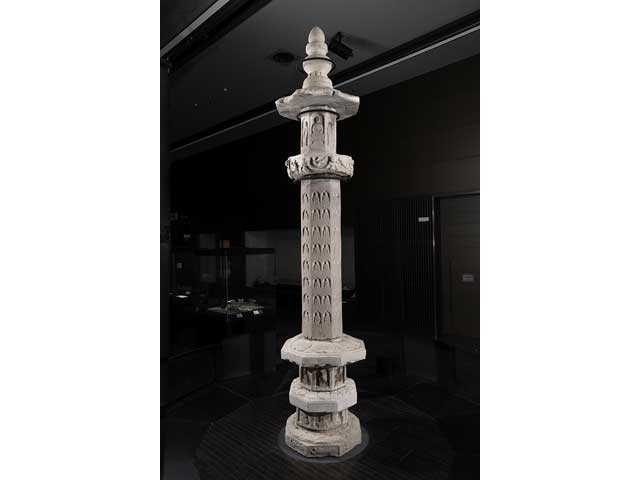 Images of Tathagata, Bodhisattva, Buddhist priests, celestials, birds, and Buddhist scriptures were engraved onto the entire surface. It was built in 1084 in Liao, China, a nation ruled by the Mongolian nomadic Kittan clan. The gross weight is 3.5 tons and the height is 5.5 meters. It was transported from the Kyoto National Museum for the opening of this museum.