Mondays (open on the Monday of 3 May)

We will be implementing entry limits on weekends and public holidays to prevent overcrowding in the exhibition hall. As such, visitors planning to visit on those days should purchase tickets and book an admission date and time slot online prior to their visit. Online tickets for weekends/holidays are available here, while online tickets for weekdays are available here (please click the globe icon at the top right corner for English interface). Visitors attending the exhibition on weekdays do not need to pre-book their admission slots, and can just present their online tickets for entry. We seek your understanding and cooperation. For queries, please see the FAQs.

“Shosoin,” also known as “Shosoin Imperial Repository,” was originally a storehouse for the Todaiji Temple in Nara. Established in the Nara period (8th century), it contained roughly 9,000 prized objects. While most of the pieces were created in Japan during this period, some of them originated from China or even further west, attesting to the cultural exchange that had occurred at the time. For nearly 1,300 years, these precious object have been carefully maintained in Shosoin, allowing them to bring a piece of Japan’s past to life for all of us here in the present.

What is Tenpyo craftsmanship?

Tenpyo culture encompasses the architecture, literature, and art that had flourished in which the Tenpyo era (729–49), during the mid-Nara period. It incorporated aesthetic elements from Tang China, influenced by objects and knowledge brought back by kentōshi envoys. This process of exchange brought Japanese art and culture to a historical peak, and led to the development of what we now consider to be “quintessentially Japanese.” Tenpyo craftsmanship encapsulates the sophisticated artisanal techniques that had stemmed from this cultural interaction, and later made their mark on the world of Japanese decorative arts.

What are the Shosoin treasure reproductions?

Reproduction of the Shosoin treasures began in the Meiji period (1868–1912) as a part of the restoration process of the same objects. Later in 1972, the Office of the Shosoin Treasure House, which is part of the Imperial Household Agency, separated the two projects, and fully dedicated resources to the study of the construction, materials, and techniques used to create these ancient pieces. The information gathered from these investigations was then used to reproduce faithful replicas. In showcasing the fruits of their research and artisans’ skilled craftsmanship over the years, this exhibition takes us back to the Nara period to admire masterpieces from the Tenpyo culture. Here are some highlights from our exhibition: 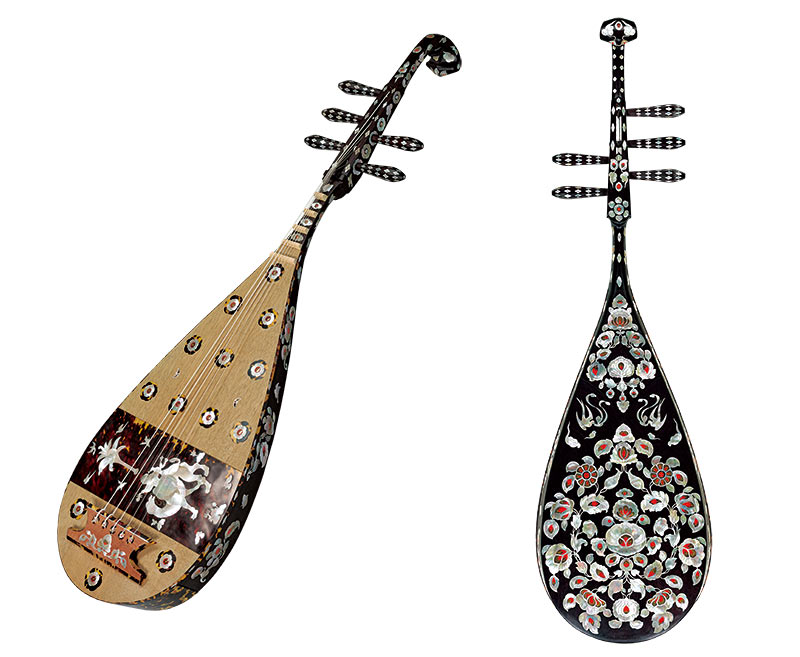 We are honored to be presenting two reproductions of one of the most iconic objects in the Shosoin repository, a red sandalwood five-string biwa lute. One was created in 1898, based on the original, while the other was produced in 2018 with reference to the reproduction. In addition to their ornate detailing, these lutes can actually be played. 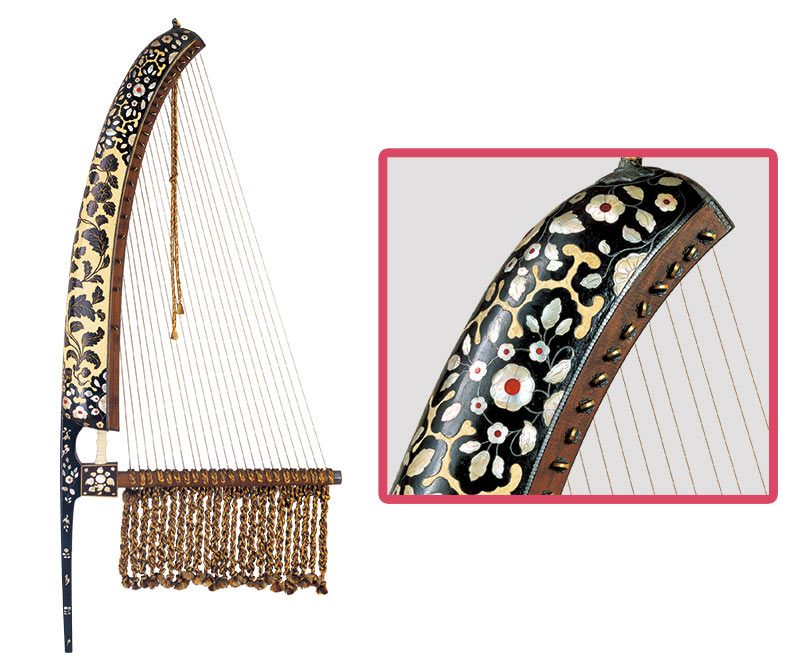 A kugo (Ch. konghou) is a type of East Asian harp played on the harpist’s lap. This reproduction was created in the Meiji era when the original was being restored. It features flowers with cores of red amber, surrounded by gleaming inlaid vines and leaves. 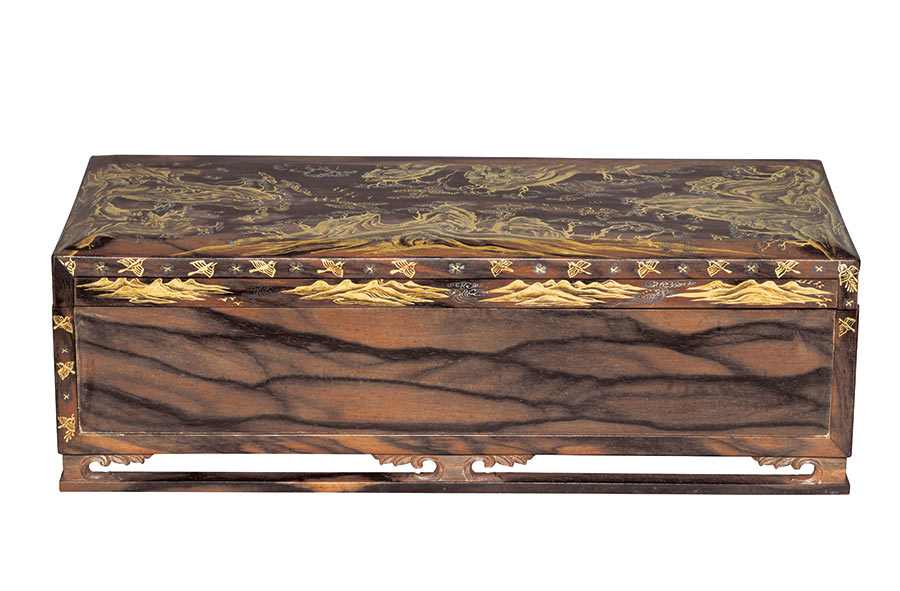 The texture of this box has been made to resemble red sandalwood by applying sappanwood dye on black persimmon wood. Its cover also features a landscape rendered in gold and silver. The superb technique of Yoshida Hoshun, an author born to a lacquerware-making family in Nara, shines through in this work. 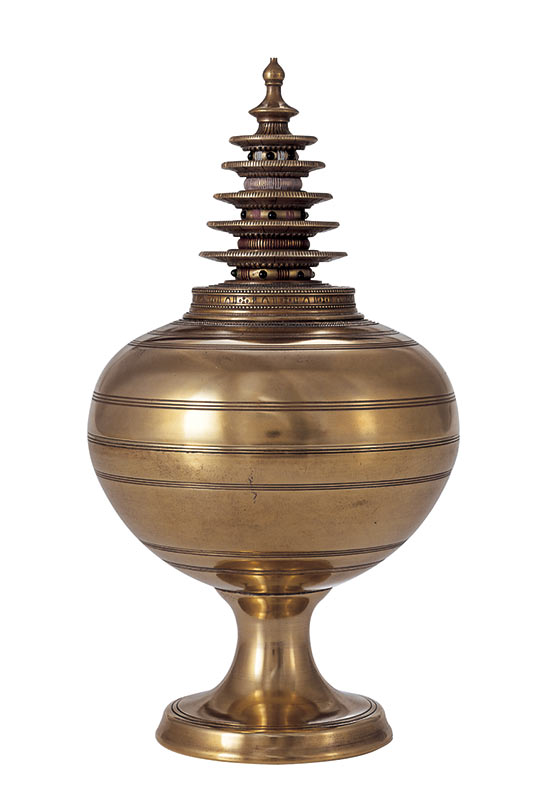 This is a reproduction of an incense container placed on the altar in front of Buddhist statues in a temple. The handle portion, which is shaped like a pagoda, is in fact constructed using over fifty tiny washers (metal rings). 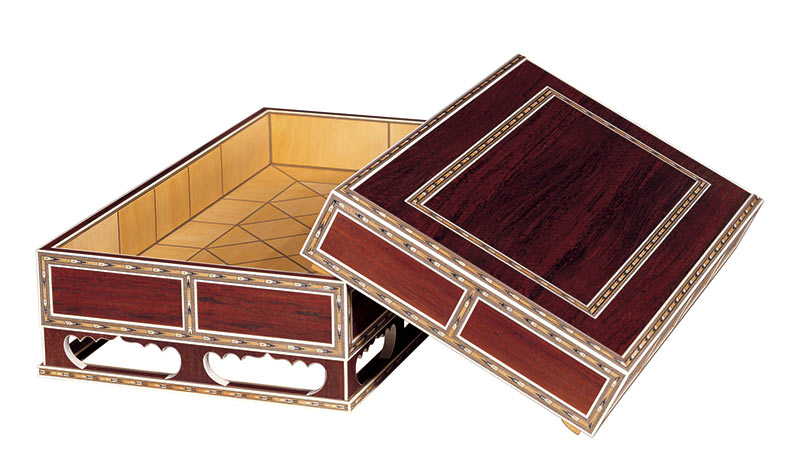 Boxes like this are used to hold offerings to the Buddha. It features inlaid decorations of a mix of materials, including, most significantly, tin. This is the first instance in which scholars have discovered the use of tin in Japanese inlaid works of that period. 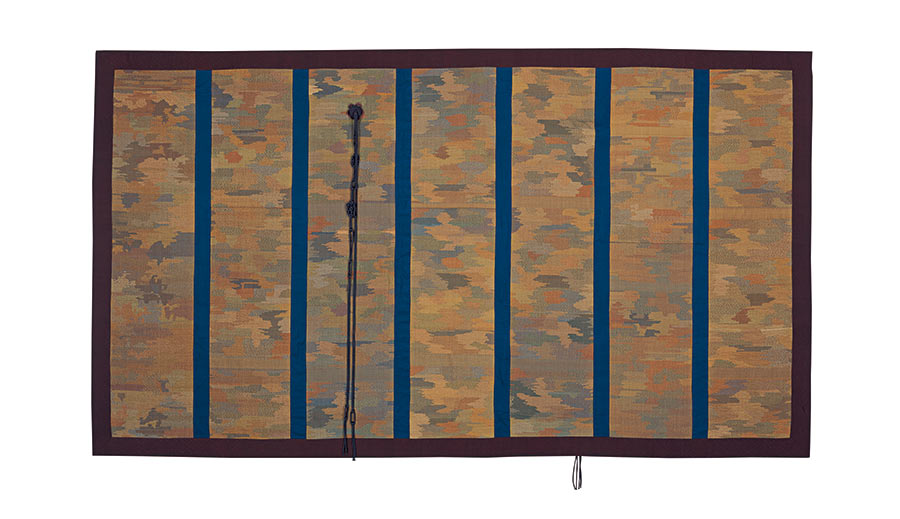 This kesa (priest’s robe) is woven using yarn spun out of two to three different-colored threads, resulting in its mottled design. This reproduction also re-creates parts of the original robes that have been lost. 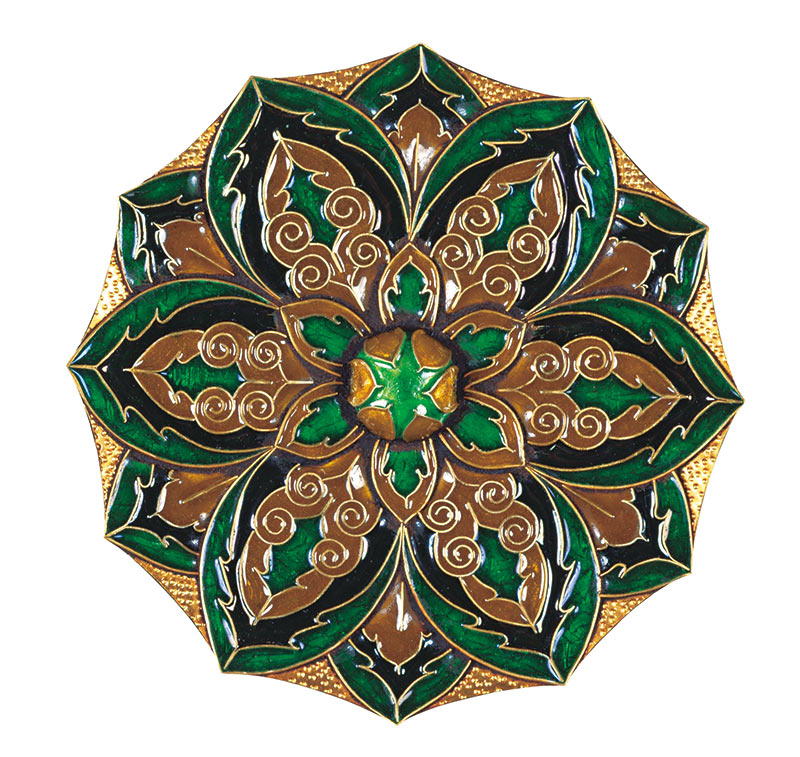 Twelve-Pointed Mirror with Decoration in Gold Plating and Cloisonné (reproduction)

Powdered glass of various colors are fused to the metal body through a firing process. The resulting enamel design makes up an elegant flower decorating the back of this mirror. 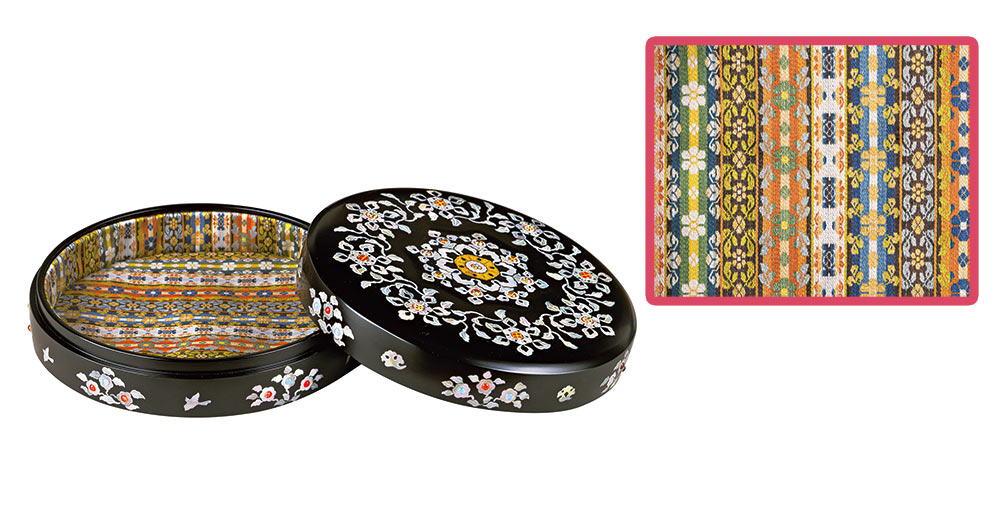 Round Box with Mother-of-Pearl Decoration (reproduction)

The original box came with a leather belt with lapis lazuli ornaments, the reproduction of which is also on display in this exhibition. It is a rare example of a lacquerware work decorated with mother-of-pearl inlay. The colorful brocaded fabric lining its interior has also been faithfully reproduced using the same weaving techniques.

Gorgeous crystals and colored glass beads adorn the openwork metal fittings distributed along the sheath of this sword. The original may have been part of Emperor Shōmu’s ceremonial outfit.

“Household Register for Kawaberi Village in Shima District of Chikuzen Province” in the Collection of Old Documents in the Shosoin, Scroll 38 (reproduction; partial)

The collection of old documents in the Shosoin make it a literal treasure trove of knowledge about ancient Japan. This collotype faithfully reproduces the writings on both sides of the scroll, the way the papers were bound together, and even the subtlest shades of ink in the text.