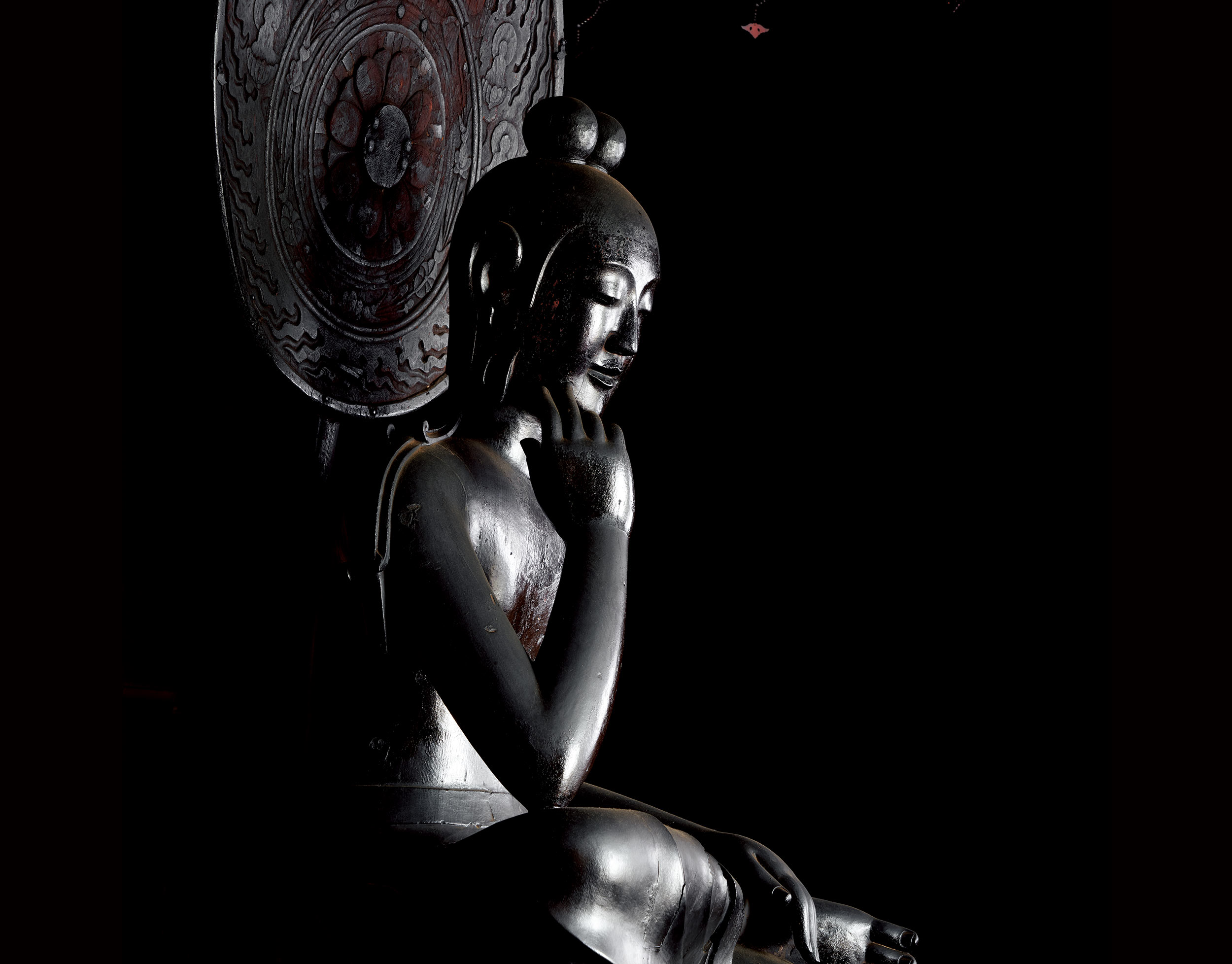 Special Exhibition
Manifestations of Mercy
Treasures from the Chūgūji Temple

Online tickets are available at ARTNE (please click the globe icon at the top right corner for English interface). Please note that we will be implementing entry limits on the number of visitors to prevent overcrowding in the exhibition hall. As such, all visitors should purchase tickets and book a visiting time slot online prior to their visit. We seek your understanding and cooperation. For queries, please see the FAQs.

Feast your eyes on many fine works of Buddhist art from the halls of Chūgūji Temple, including a number of National Treasures and Important Cultural Properties. 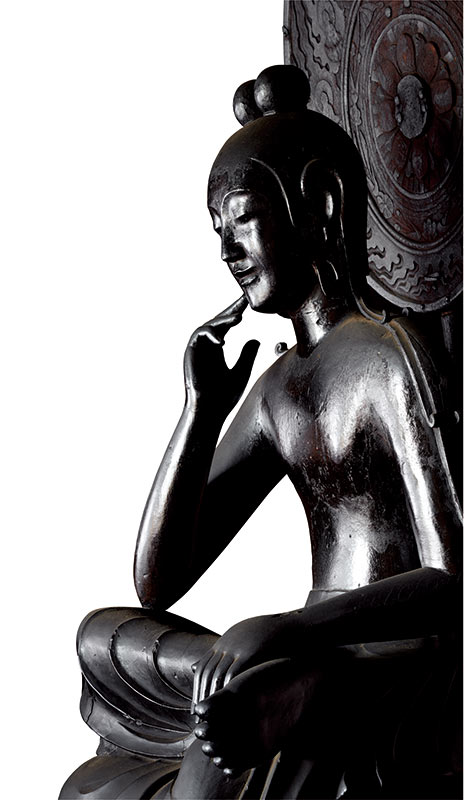 With its gentle gaze and quiet smile, this bodhisattva has captured the hearts of many as Chūgūji’s main object of worship. While the temple traditionally names it as Chintamanichakra Bodhisattva, it was likely originally a statue of Maitreya Bodhisattva. 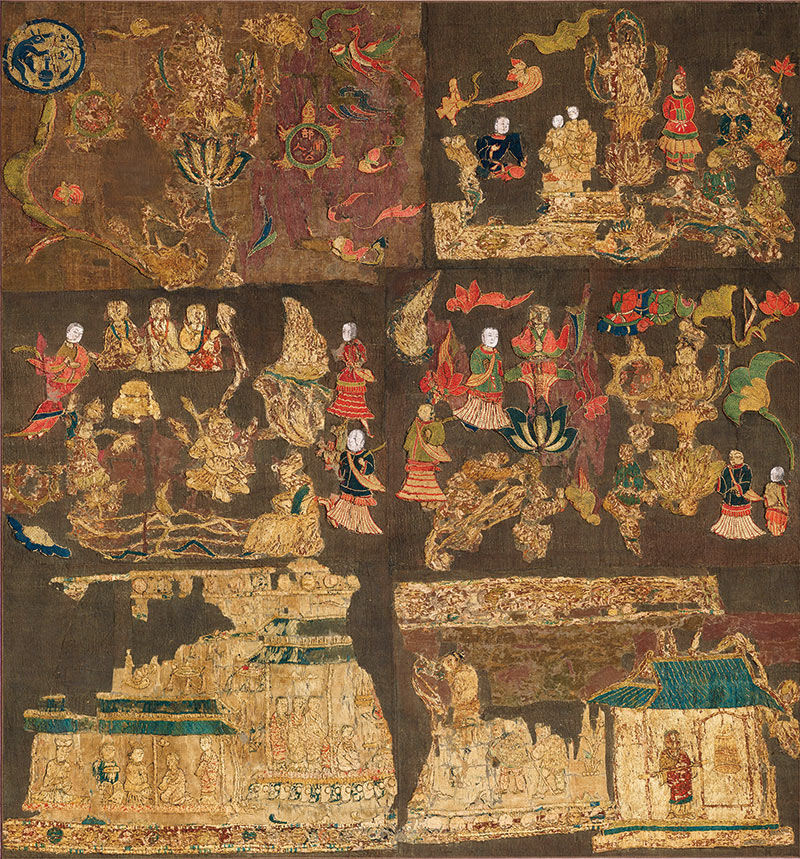 This textile work depicts the Tenjukoku, the Buddhist realm of paradise into which Prince Shōtoku is said to have been reborn after his death. Originally commissioned in the Asuka period, it was later replicated in the Kamakura period by Chūgūji abbess Shinnyo. The current work was pieced together in the Edo period from remnants of both the original and the replica. 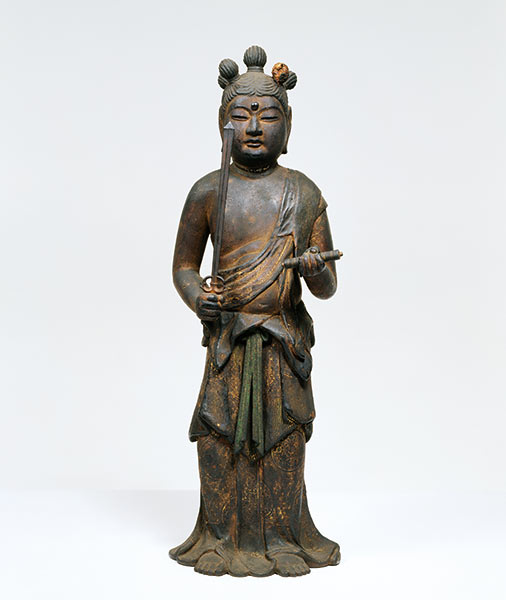 Here is an unusual Buddhist statue that was created by sticking multiple layers of paper over a core made from Buddhist scriptures and scrolls. It may have been commissioned by Chūgūji abbess Shinnyo, who was responsible for restoring the temple in the Kamakura period.

Aside from displaying the many objects owned by Chūgūji, this exhibition also traces the history of the temple from its establishment in the seventh century, through its restoration in the thirteenth century by its abbess Shinnyo, up until it became designated an imperial temple (monzeki) around the late sixteenth to seventeenth century. 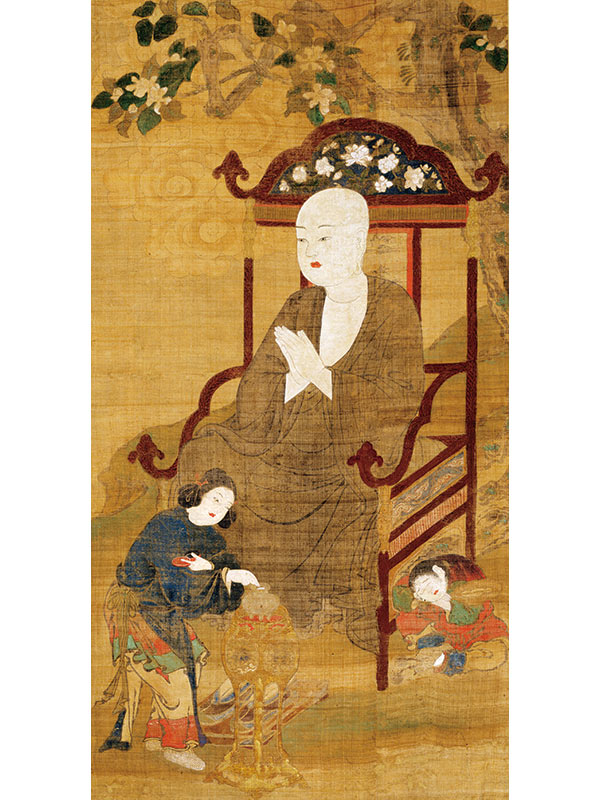 The subject of this portrait is allegedly the nun Shinnyo, who had discovered the Tenjukoku Embroidery and restored Chūgūji. Although the artwork originally depicted one of the Sixteen Arhats, the pale and gentle figure portrayed happened to resemble Shinnyo, leading later generations to believe it to be a depiction of her.

These sliding doors came from the elevated section of Chūgūji’s reception hall, where the highest ranked members of a gathering would have sat. The vividly colored birds and realistic flowers take after court furnishings, making them befitting of an imperial temple.

Images of the Pensive Bodhisattva and Maitreya: From Ghandara to Japan

The principle image of Chūgūji is a pensive bodhisattva, which is a type of Buddhist image with origins in Gandhara. This exhibition dedicates a section to introducing this type of imagery, tracing its roots and its eventual spread to Japan.

Meditation under a Tree

Gandhara is known for being the birthplace of Buddhist images. Many temple stupas there bear carvings telling the story of Buddha’s life. The scene at the right is of Prince Siddhartha Gautama (the name Buddha was known by before attaining enlightenment), deep in thought as he watches a farmer working on a hot summer day.

Square faces and neatly folded robes are characteristic of Chinese Buddhist sculptures created in the Northern Wei dynasty. This style was inherited by Japanese sculptor Kuratsukuri Tori, who went on to create many works considered representative of Asuka-period Buddhist sculpture. 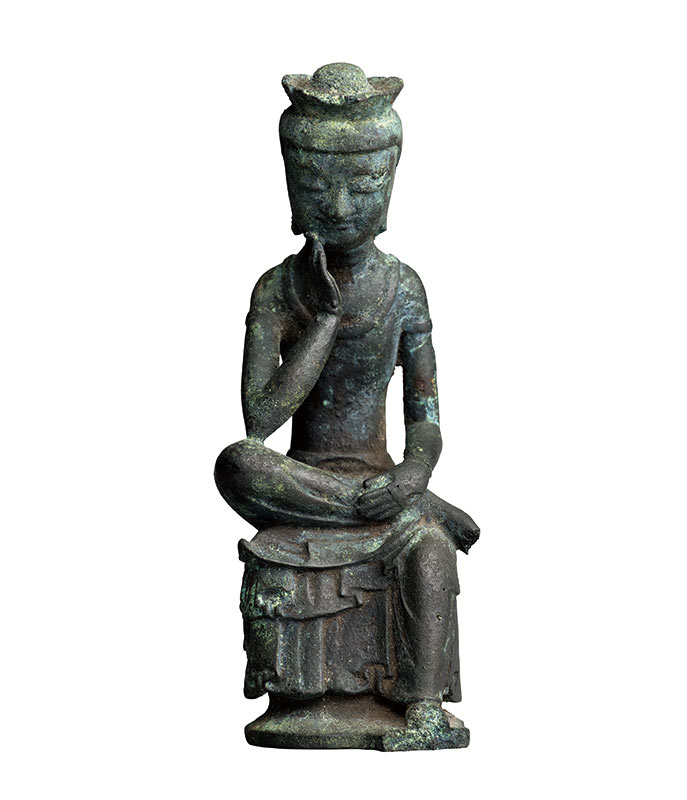 This sculpture was worshipped as an image of Jesus Christ in Urakami, Nagasaki. The crown and robes on this figure tell us that it was a product of the Silla Kingdom in Korea. These features can also be found on the Pensive Maitreya Bodhisattva statue enshrined in Kyoto’s Kōryūji Temple, which has been designated a National Treasure. 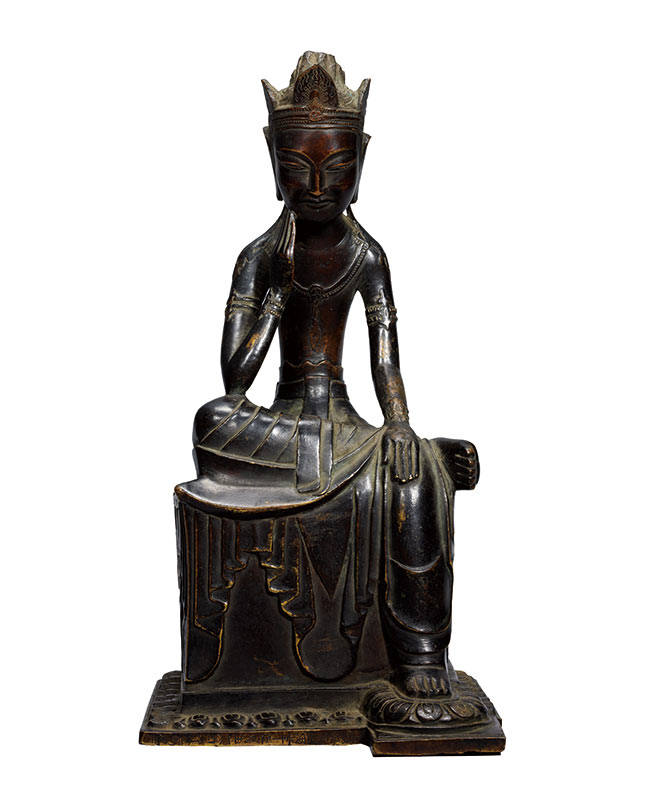 This statue of a bodhisattva is seated on a shumiza, which is the seat of a buddha. This implies that this statue represents Maitreya, who is slated to achieve enlightenment and become the buddha of the future, succeeding Shakyamuni, the buddha of the present.

Of all the pensive bodhisattva images in Japan, this is the only statue inscribed with Maitreya’s name. This Maitreya is plump and childlike, adhering to the style popular in the latter half of the seventh century. 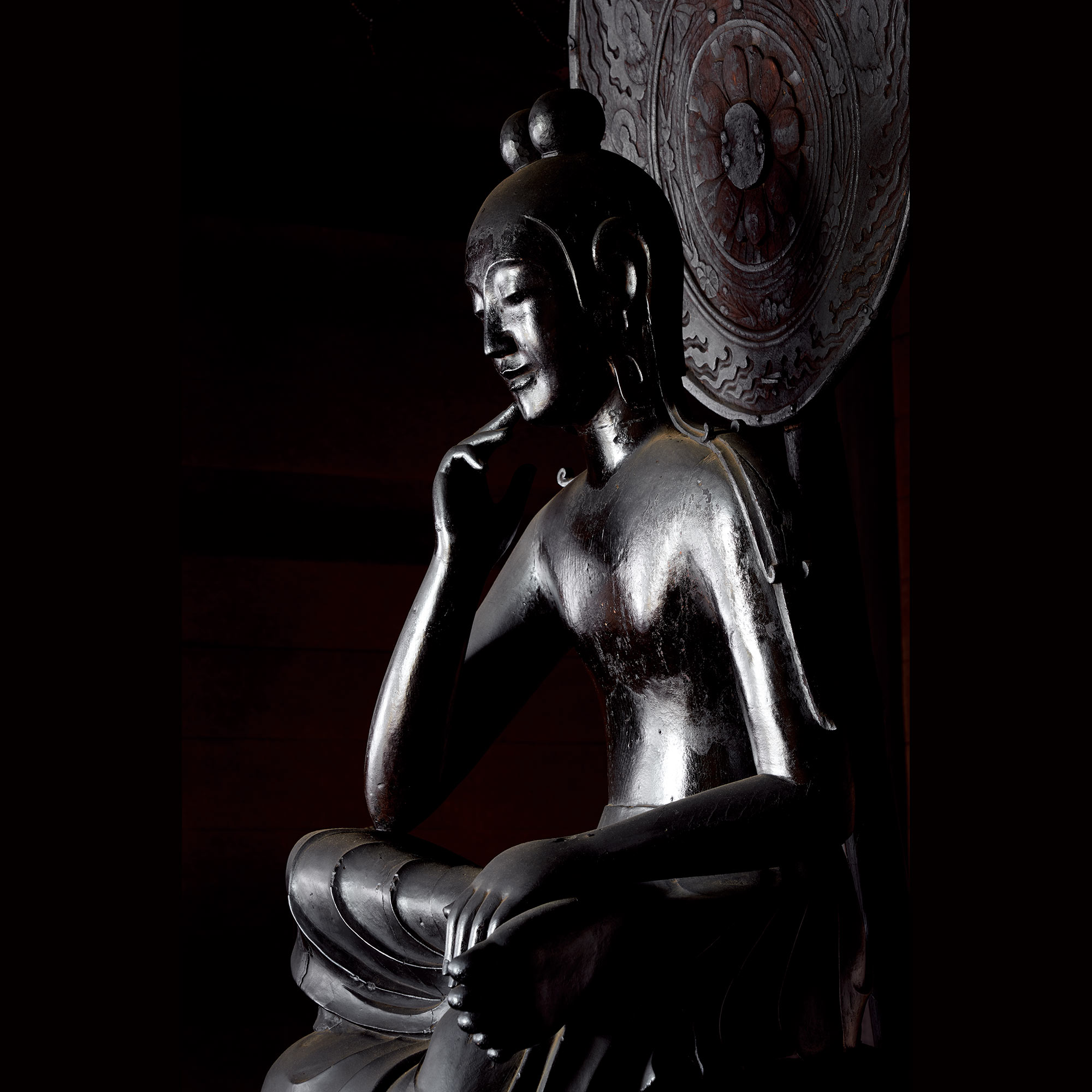