*Sales for late admission tickets will open after 17:00 at the counters and cannot be bought in advance before 17:00. Ticket is valid only on day of purchase.
*Admission is free for persons with disability and 1 caretaker. Please present the necessary documents.
*Price in ( ) reflects the cost of advance tickets and group (more than 20 people) tickets
*( ) also reflects the cost for persons over 65 years old. Please present the necessary documents showing with birth date such as health insurance card and driving license.

*English audio guides and explanations are available for this Special Exhibition.

Ashikaga Takauji was the founder and the first shogun of the Muromachi shogunate (warrior government) which was based in Kyoto, and his reign was succeeded by fourteen kinsmen. The first 60 years overlaps the Nanbokucho period, or Northern and Southern Courts period, while the latter half of the Muromachi period overlaps the Warring States period, where warlords, or daimyo, all across the country, fought one and other in quest of national hegemony. One of the great turning points of Japanese history, this revolutionary period saw the fifteen generations of Ashikagas maintain their positions as shoguns for about 240 years, from the first shogun, Takauji, to the last and fifteenth shogun, Yoshiaki.

While each reign faced political instability, the third and eighth shoguns established their original aesthetic while asserting their identities as warriors. They proactively assimilated courtly culture which were passed down by nobles of the Heian period, as well as East Asian culture which were introduced through trade. The arts and culture patronized by the rulers began to spread across the country. Even today, they continue to resonate in the minds and hearts of the Japanese people.

This exhibition showcases the portraits of successive shoguns and beloved artifacts of the shoguns. They demonstrate the appealing personality of each shogun, as well as the rise and fall of the Muromachi shogunate government. The rich culture and aesthetic of the Muromachi period is presented through the artifacts treasured by these shoguns. One of the highlights of the exhibition is the thirteen statues of the shoguns, which were enshrined at Toji-in Temple in Kyoto, Ashikaga’s family Zen temple erected by Takauji in 1341. This is a great opportunity to view the thirteen statues which are displayed outside the temple for the first time.

Explore the world of Muromachi shoguns from a new perspective.

Unlike Kamakura or Edo shoguns, the Muromachi shoguns directly shaped politics and culture, making their personalities and leadership one of the focal points of this exhibition.

Cultural influences brought about by Muromachi shoguns will be introduced through paintings, primary documents, and shogun family treasures.

A careful selection of 134 artifacts (14 National Treasures, 71 Important Cultural Properties) will be exhibited.

Chapter 1: Conflict between Northern and Southern Courts, and Ashikaga Takauji

This chapter introduces the stormy life of Ashikaga Takauji, his multifaceted faith, and his various achievements.
Takauji was born in 1305 to the distinguished Ashikaga family of the Genji clan. While the Ashikaga family were powerful retainers of the Kamakura shogunate, they supported Emperor Godaigo in overthrowing the government. Takauji had participated in the new Kenmu administration, but his alliance with Emperor Godaigo eventually ended. In 1336, he founded a new political administration (Muromachi shogunate) in Kyoto with his younger brother, Tadayoshi, where he led as the head of the warriors. In addition, he was also a devoted follower of Zen master Muso Soseki. Takauji was engaged in various Buddhist activities, such as ordering the construction of Tenryu-ji Temple to hold a memorial service for Emperor Godaiji, and completing transcriptions of Buddhist scriptures. Takauji also sent merchant vessels to Yuan and Ming dynasties of China to raise funds to build Tenryu-ji Temple. This also paved the way for licensed trade with Ming China, which was initiated by the third shogun of the Muromachi shogunate, Ashikaga Yoshimitsu.

I am the real Takauji 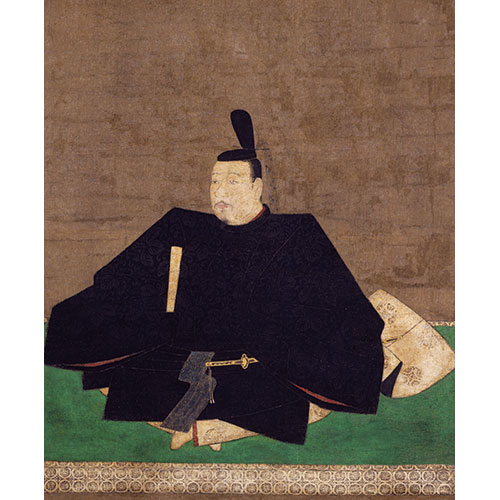 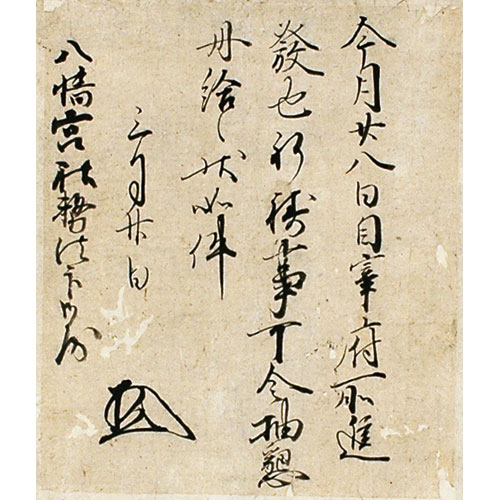 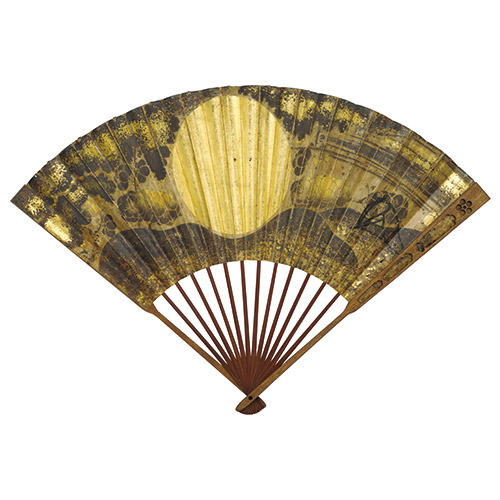 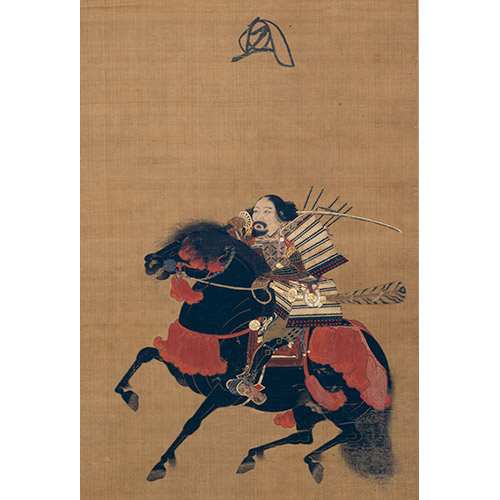 Chapter 2: Splendor of the Muromachi Shogunate – Yoshimitsu and Yoshimochi, and karamono

This chapter focuses on the golden age of the Muromachi shogunate, where both government and culture flourished as a result of Yoshimitsu’s and Yoshimochi’s treasures. The trend of karamono imports and decorations for the tatami room started by Yoshimitsu, and later carried on by succeeding shoguns, will also be introduced.
Amid the social turmoil of the Northern and Southern Courts, Ashikaga Yoshimitsu became the third shogun at the young age of 11. However, he demonstrated a knack for political affairs, including uniting warriors and court nobles, and Northern and Southern Courts, as well as successfully controlling powerful warriors in their respective regions. In addition, he vigorously promoted licensed trade with Ming China, importing various rare items from China and other Asian regions, particularly Chinese calligraphic works, paintings, and craftworks of the highest quality, called karamono or Chinese articles. Yoshimitsu personally judged and valued these rare items, which also helped enhance the shogun’s authority. The fourth shogun, Yoshimochi, inheriting prestige from his father, Yoshimitsu, which solidified the base of the shogunate. Meanwhile, Yoshimochi was even more devoted to Zen Buddhism and Confucian studies than his father, winning high acclaim for his talent in art, particularly in calligraphy and painting.

The grand “King of Japan” 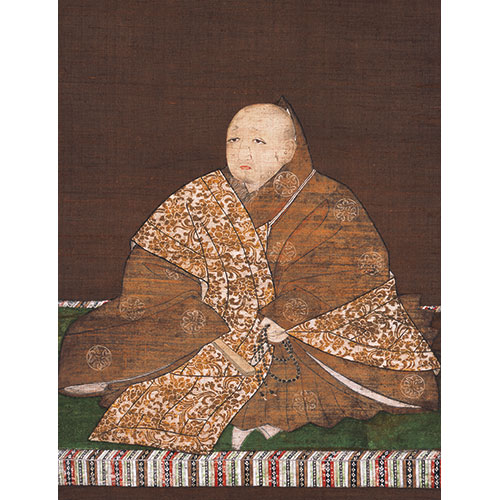 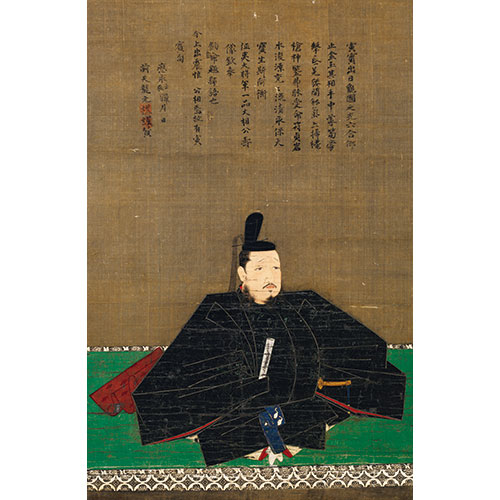 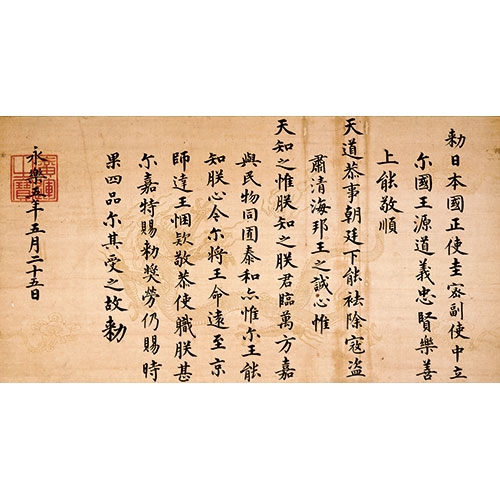 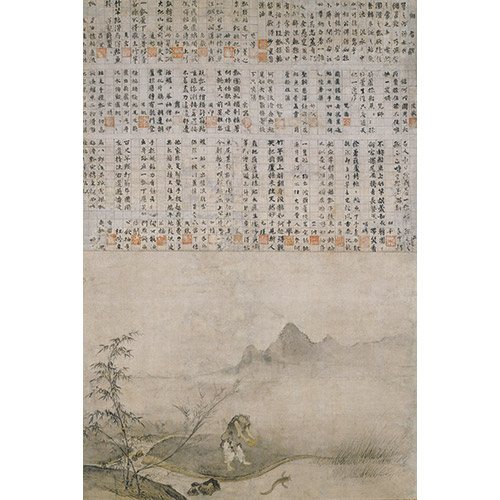 Chapter 3: Waning political power of the shoguns and blossoming Muromachi culture – the age of Yoshinori and Yoshimasa

This chapter focuses on Yoshinori’s and Yoshimasa’s reign, where they drastically changed the political scene, in particular increasing the shogun family treasures and developing Muromachi culture.
After Yoshimochi’s death, Yoshinori was selected by lottery and became the sixth shogun. He ruled the shogunate with his father, Yoshimitsu, as the ideal leader in mind and further perfected the shogun family treasures, such as karamono (Chinese articles). However, his tyrannical behaviour resulted in a violent death. During the reign of the 8th shogun Yoshimasa, Yoshinori’s son, the Onin War broke out and inflicted unprecedented damage on Kyoto. The struggle for power among powerful warlords and the dispute over shogunal succession created further chaos. This war is regarded as the onset of the subsequent Warring States period. The combination of Yoshinori’s death and the Onin War significantly eroded the political power of the Muromachi shogunate. However, the shoguns maintained their cultural authority. This period saw the refinement and development of the shogunate’s etiquette and ceremonies, as well as the various rules for displaying ornaments in tatami rooms and performing arts.

Selected by lottery, the shogun who was feared by many 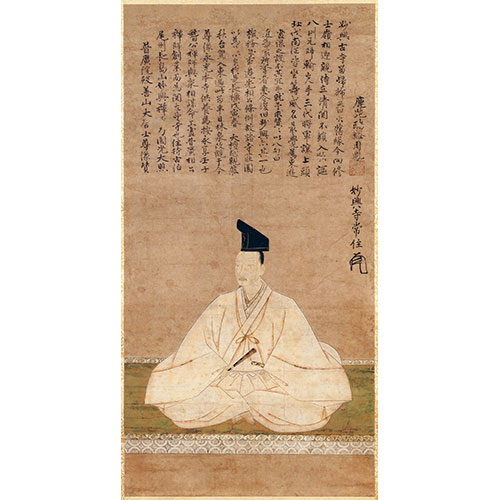 Majestic armor of Yoshinori, the commander-in-chief 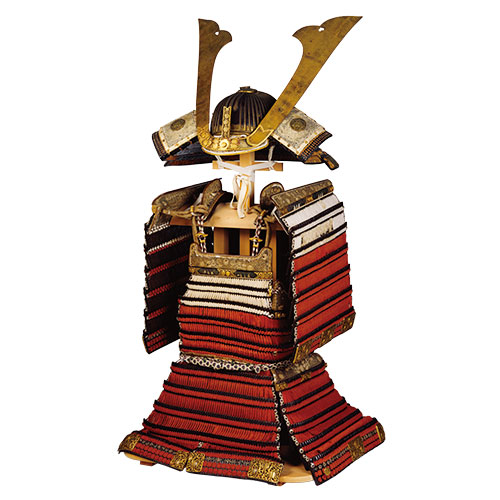 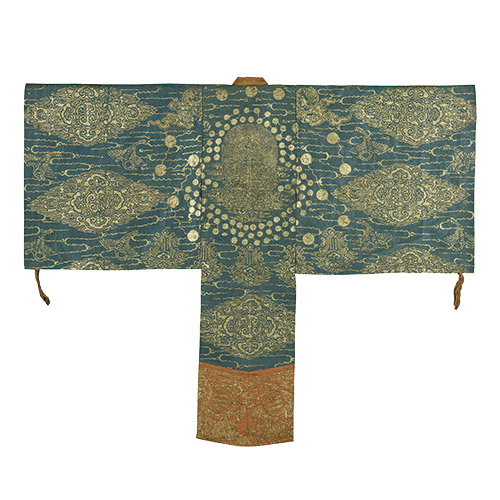 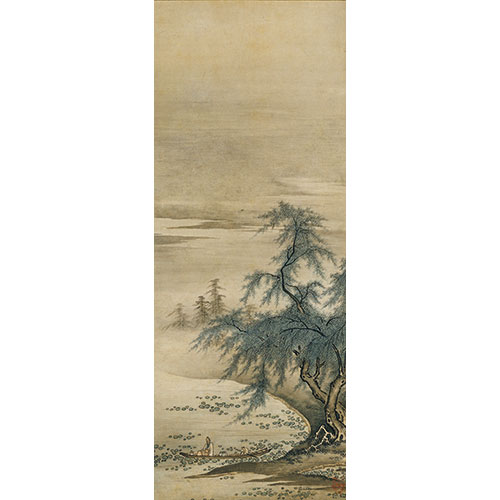 Chapter 4: Shoguns in the Warring States period – Wandering shoguns and the fall of the Muromachi Shogunate

This chapter explores how the shoguns of the Warring States period maintained their prestige and the fall of the shogunate.
The Onin War which spanned eleven years, frequent famines, and armed uprisings by the masses, had resulted in a notable decline of the power and authority of the Muromachi shogunate. The shoguns lost influence and control over the daimyos who began to fight among themselves. As a result, the shoguns were tossed about by the daimyos in their struggle for hegemony. The 10th shogun, Yoshitane, was forced to leave Kyoto and wander through various provinces, while both the 11th shogun, Yoshizumi, who succeeded Yoshitane, and the 12th Yoshiharu, were also expelled from Kyoto. The 13th shogun, Yoshiteru, was killed by his retainer, and the 15th and last shogun, Yoshiaki, was forced out of Kyoto in 1573 by Oda Nobunaga. The expulsion of Yoshiaki indicated the demise of the Muromachi shogunate. Yet, despite the social upheaval and political turmoil, the shoguns still retained their prestige and were able to unify their supporters.

The oldest folding screen painting of the shogun’s residence 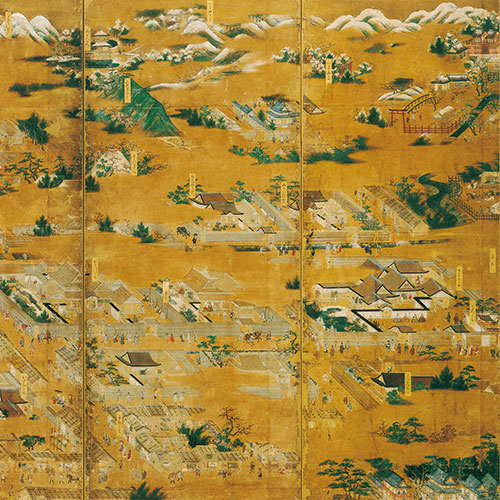 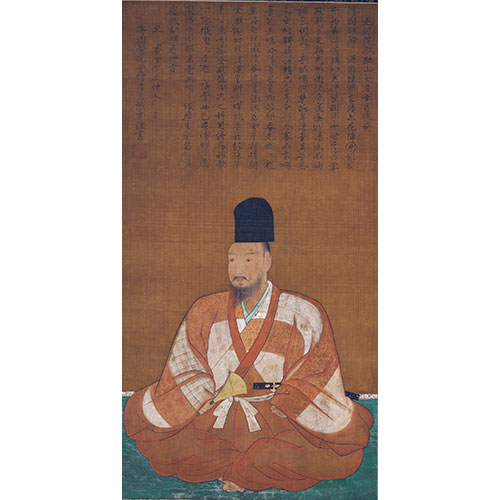 Penmanship of the last shogun in the last years 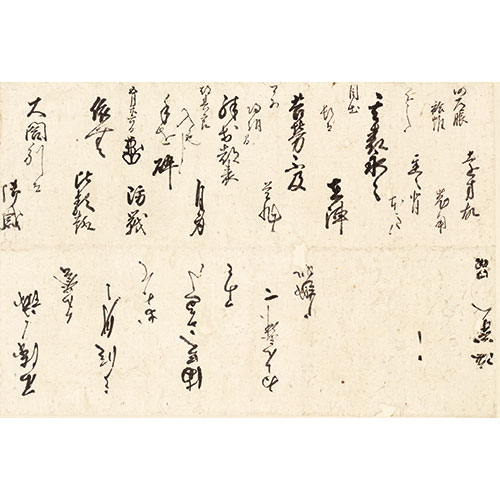 Special! The famous sword of Yoshiteru 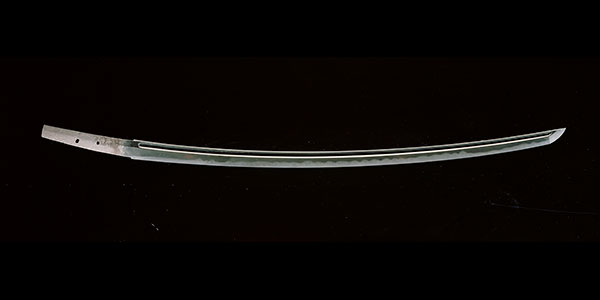 All 13 statues of the shoguns gathered in Kyuhaku! 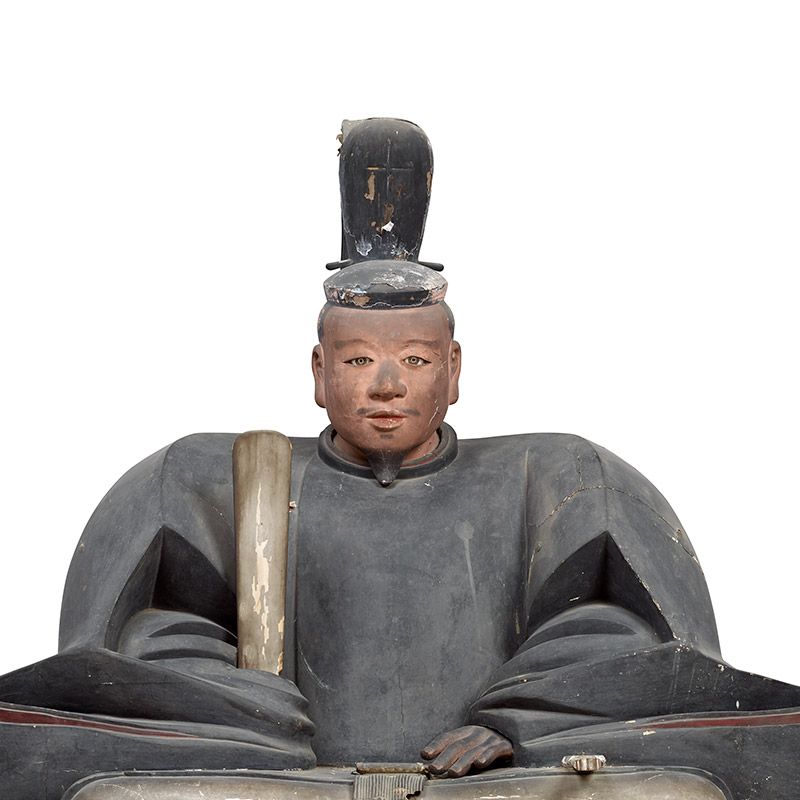 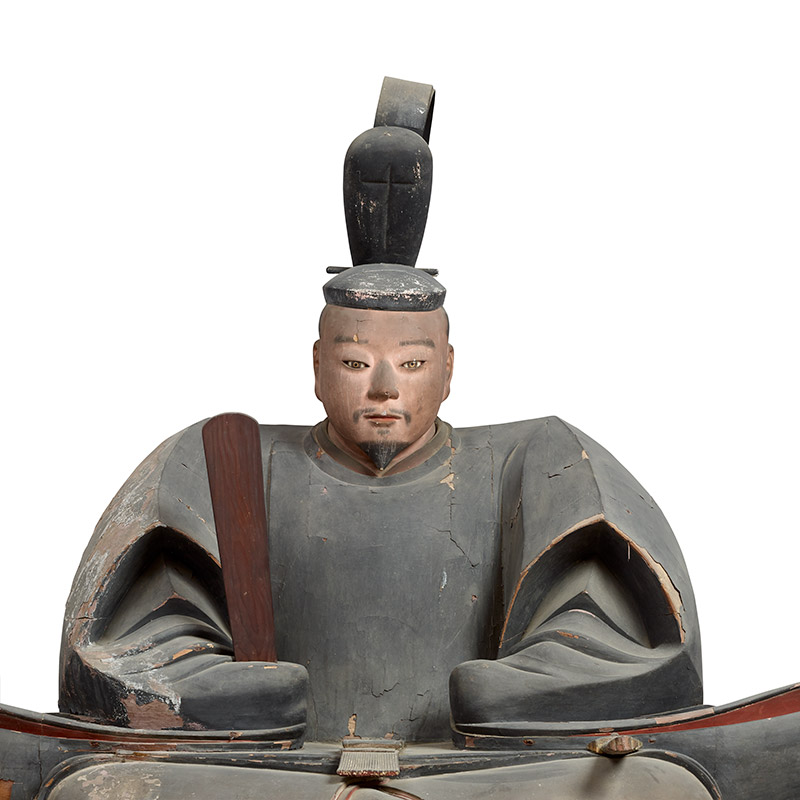 The Key to Solidifying Power 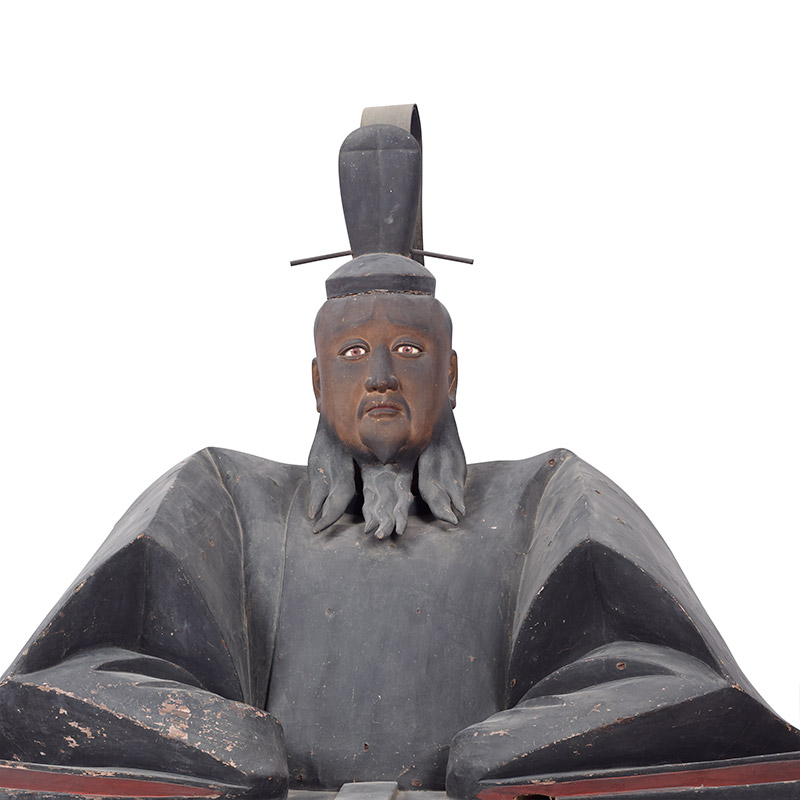 The Shogun with Unrivaled Charisma 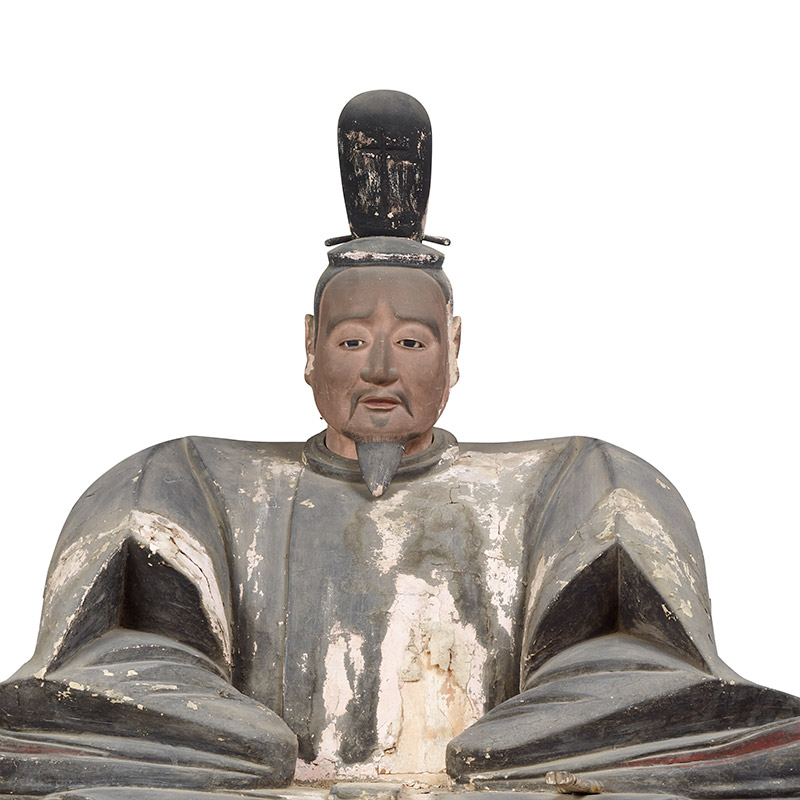 The Wisest Shogun of All Time 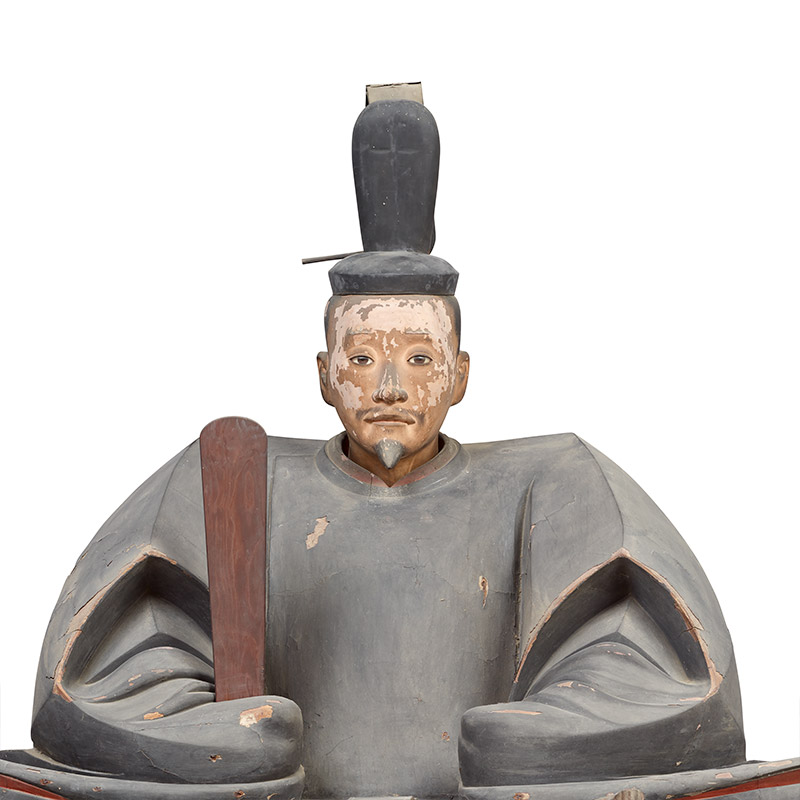 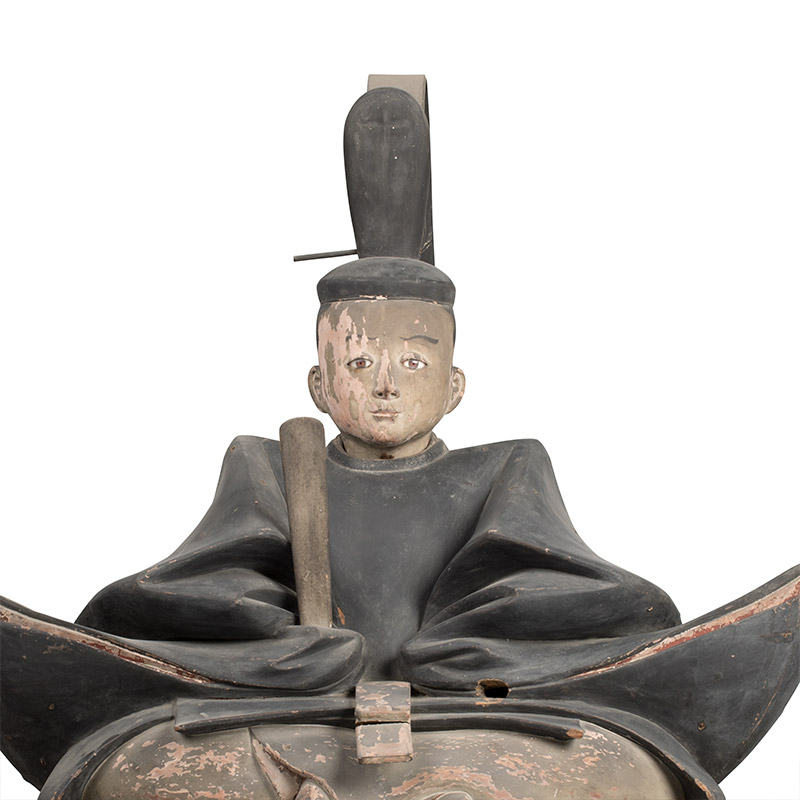 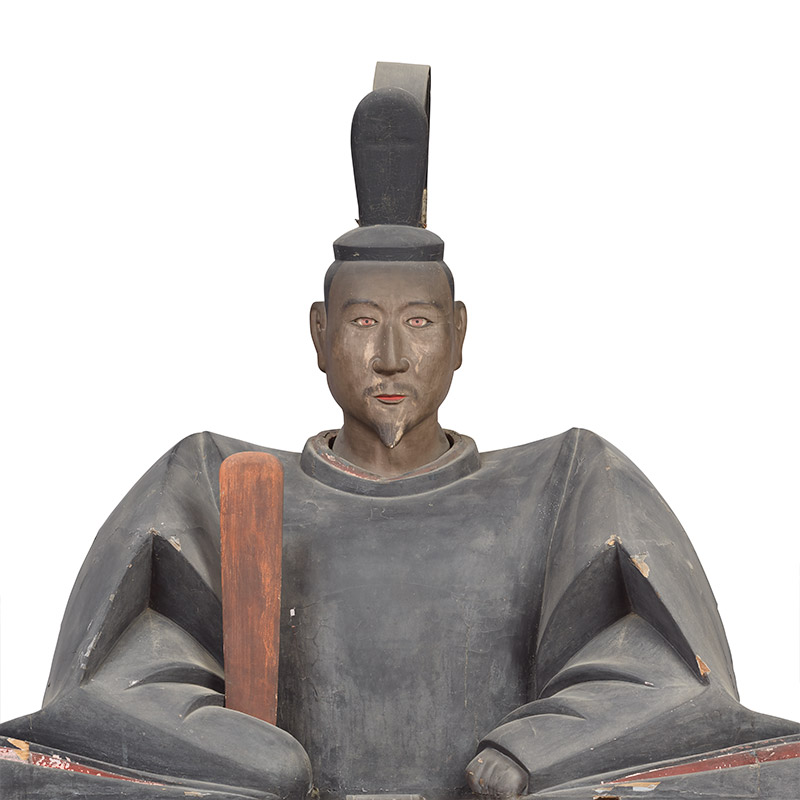 The Culturati Who Invited Chaos 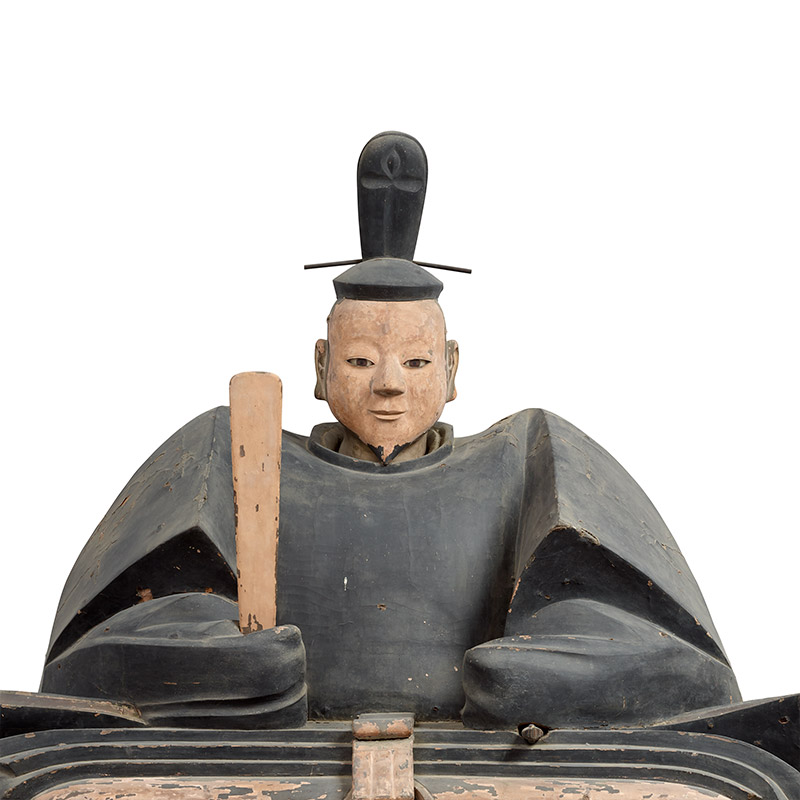 The Young Shogun Who Died In Battle 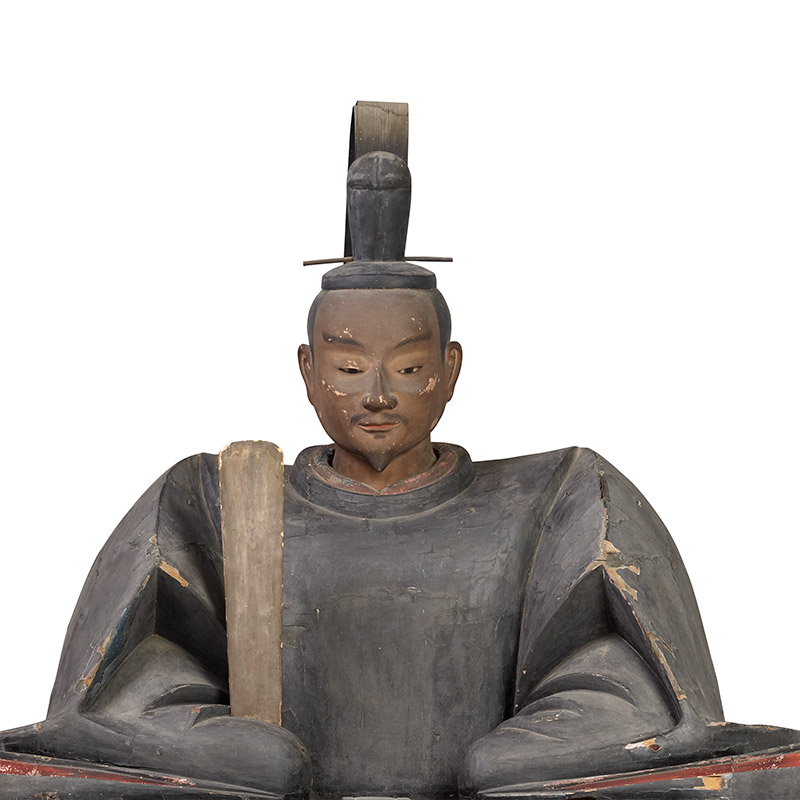 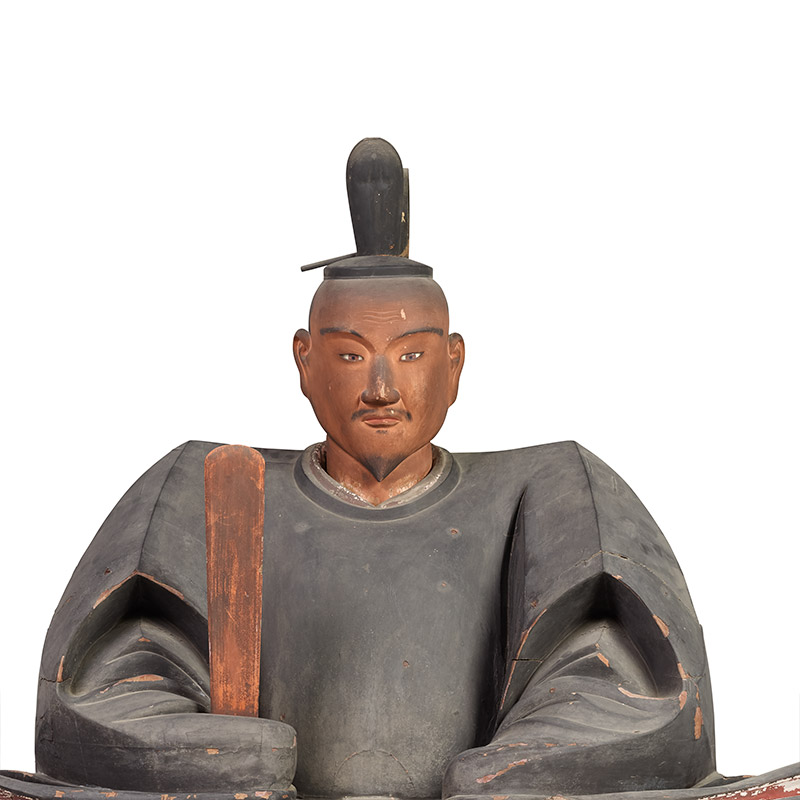 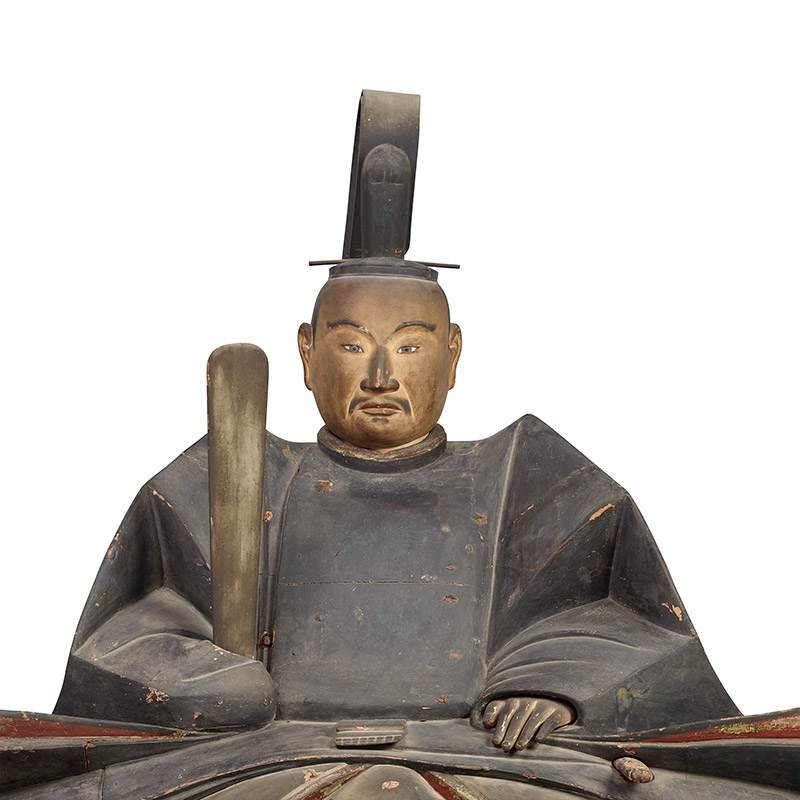 The One Who Dreamed of Restoring His Shogunate at Lake Biwa 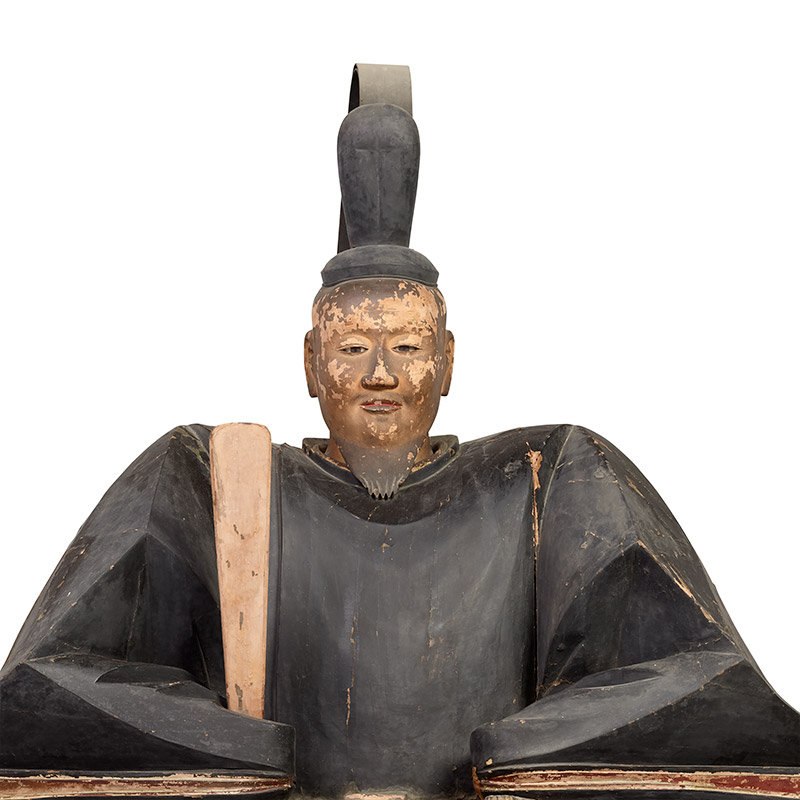 The Shogun Who Died With Regrets 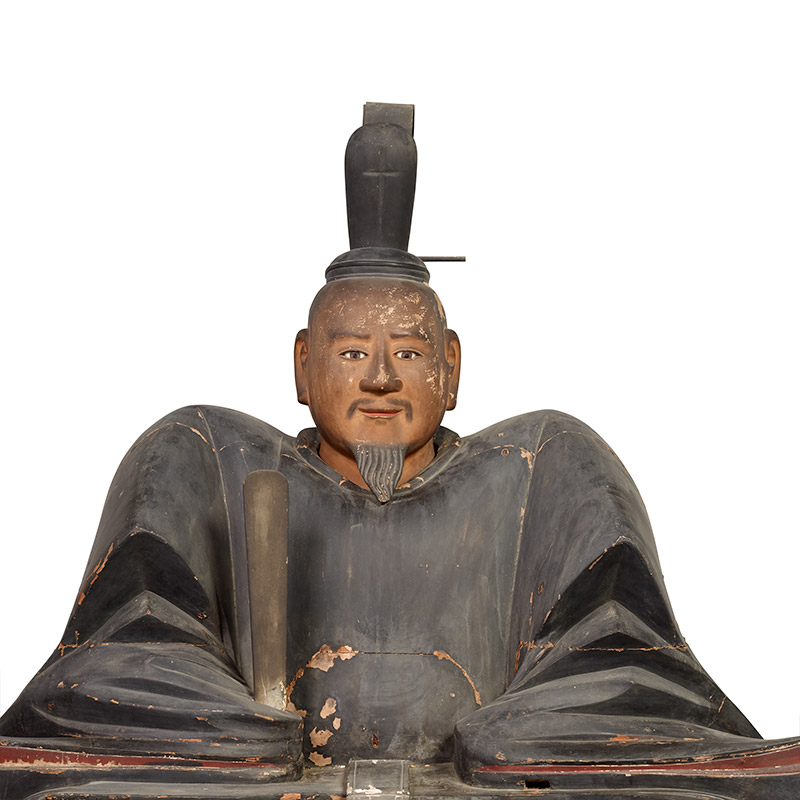 The Shogun With The Pipe Dream of Returning To The Capital

The Toji-in Temple, which follows the Rinzai school of Buddhism, was built in 1341 by Ashikaga Takauji, and founded by Muso Soseki. Life-size statues of successive shoguns (with the exception of 5th shogun, Yoshikazu, and 14th shogun, Yoshihide) are enshrined in Toji-in.