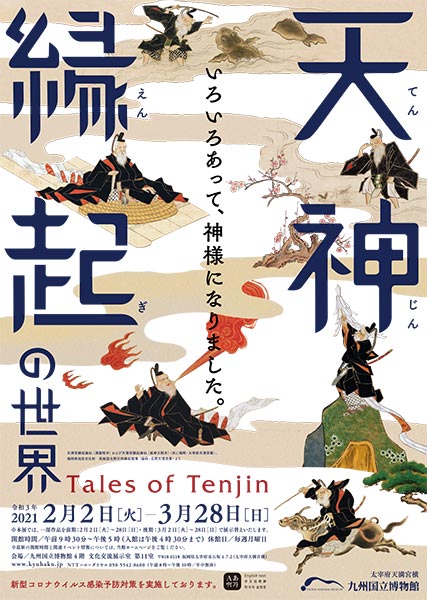 Prior to his posthumous deification as the god of learning, Tenjin was known as Sugawara no Michizane (845–903), an important Heian-period scholar and statesman. His flourishing career at the imperial court ended abruptly with his exile to Dazaifu, where he eventually died in obscurity. The legends surrounding his tumultuous life on earth and his supernatural afterlife have since been passed down through the generations, often in pictorial form. These traditional tales first appeared in illustrated handscrolls before expanding its viewership in the form of hanging scrolls. Later on, people began also telling more regional tales that traced Tenjin’s footsteps in local places and histories, allowing a more diverse audience to relate to him.
In recent years, a string of discoveries related to the legends of Tenjin have emerged in Fukuoka, including new additions to the limited number of hanging scrolls we had known of before. We have thus taken this opportunity to hold an exhibition showcasing these objects, presenting the legends as a window to the fascinating world of Tenjin. We hope that you will uncover fresh insights into this remarkable figure and his enduring cultural legacy through this exhibition.

After Sugawara no Michizane died in 903, a series of disasters befell the nation. The imperial authorities believed that Michizane’s vengeful spirit was causing these misfortunes, and thus enshrined him as the deity Tenma Daijizai Tenjin (often shortened to just “Tenjin”) out of fear. Tenjin shrines are thus known as “Tenmangū,” which means “shrine of Tenma.” As worship of Tenjin became more widespread in the late Heian period (8th–12th century), the nation saw the rise of legends revolving around the events of Michizane’s life, as well as the establishment of the Kitano Tenmangū Shrine in Kyoto. In fact, this shrine is the subject of the oldest existing documentation of these legends, the Legends of the Kitano Tenjin Shrine, which dates to 1194. Records also indicate that the Dazaifu Tenmangū had created a similar work in 1215. This, however, has been lost, and we have no way of knowing its precise contents. In this section, we focus on the development of legends surrounding Tenjin in Dazaifu from past to present, including these lost legends.

Part 2: The Birth of Local Legends

The tales of Tenjin boast a rich variation in their contents, and have only become more diverse over time. The Legends of the Kitano Tenjin Shrine, for example, chronicles the founding of the Kitano Tenmangū in Kyoto, and also includes stories emphasizing Tenjin’s benevolence. From the Kamakura period (12th–14th century) onward, this work became the basis for origin stories about local shrines dedicated to Tenjin. The pioneering work in this movement was the collection of Legends of the Matsuzaki Tenjin Shrine handscrolls from the Hōfu Tenmangū Shrine in Yamaguchi, produced in 1311. The last of the six scrolls depicts the foundation of the Matsuzaki Tenjin Shrine (the original name of the Hōfu Tenmangū), along with scenes of the shrine bustling with worshippers. Local origin stories like this one included scenery and stories familiar to their audiences, and thus played an important role in expanding and strengthening Tenjin’s following.

The region of Dazaifu, home to the Dazaifu Tenmangū, also developed its own legends. In 1693, Kuroda Tsunamasa, the feudal lord of Fukuoka, ordered the compilation of what is now known as the Genroku version of the Legends of Tenmangū. What has survived of this compilation consists only of text, and it is unknown whether the original work also included images. Extant illustrations of the Dazaifu legends date from the eighteenth century onward and include those of the Hachimangū Shrine in Nagasaki, as well as the Dazaifu Tenmangū’s Enjuōin and Manjōin versions. These typically feature tales local to Dazaifu and its surrounding areas, and many places that appear in these stories still retain significance today as sacred sites related to Tenjin. The works in this next section, which features several newly discovered hanging scrolls, illustrate the extraordinarily rich legends of Tenjin that have arisen in and around Dazaifu.

Part 4: The Many Faces of Tenjin

The legends of Tenjin often portray Sugawara no Michizane alongside the various Tenmangū shrines mainly through images, and occasionally text as well. Tenjin himself, however, is also the subject of a rich tradition of portraiture, both in painting and sculpture. Like the legends, this tradition has its roots in the Heian period. Portraits of Tenjin represent him in a great variety of ways. Many of them depict him wearing the court dress of the Heian nobility, while others depict Tenjin resting on a makeshift “mat” made of ship mooring lines during his journey to exile in Dazaifu. Yet another group of paintings draws from a story in which Tenjin becomes the disciple of Wuzhun Shifan, a revered monk who lived during China’s Southern Song dynasty (1127–1279). In this section, we present the many faces of Tenjin as portrayed after the Heian period. 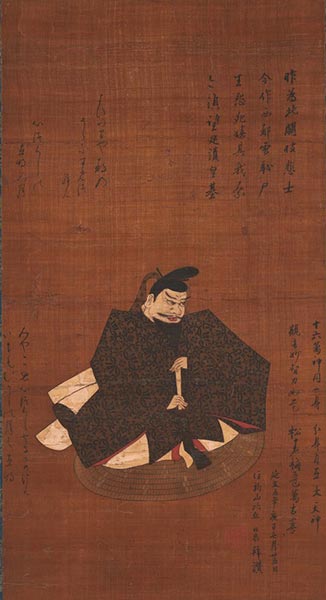 Tenjin on a Mat of Mooring Lines

Tenjin and the Flying Plum Tree