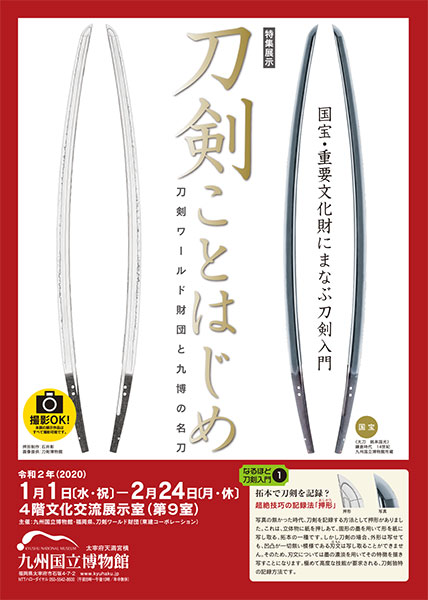 Japanese swords have always been a subject of fascination both within and outside of Japan. Global interest in Japanese swords has grown over the past few years, and continues to do so even as we enter a new decade. Nevertheless, the barrier to understanding and appreciating these exquisite works of art looms high, the various terminology associated with sword parts and designs proving archaic and inaccessible even to the Japanese. This exhibition aims to provide an introduction to Japanese swords, with multilingual panels and descriptions explaining their main features as well as their history.

Photography is permitted for all works displayed in this Feature Exhibition.

(Flash photography and the use of tripods is prohibited.)

This exhibition is divided into three sections focusing on three of the most historically prominent schools of sword making in Japan.

Part 1: The Rai School of Yamashiro and Their Successors

The Rai school, one of the sword-making schools based in Yamashiro (present-day Kyoto), boasted many renowned swordsmiths whose influences spread as far as Kyushu. Rai swords are all objects of beauty, notable for their exquisite sword grain and straight blade patterns.

Part 2: The Ichimonji School of Bizen

Bizen Province (present-day Okayama) is known for being a major production center of Japanese swords. One of the schools that emerged in the area was the Ichimonji school. Many swords produced by makers in that school are carved with the character ichi (one), with the connotation of tenkaichi (best in the world). This in turn became the name of the school, for ichimonji literally means “the character ichi.” Unlike swords of Rai make, Ichimonji swords are captivating for their lively chōji (clove-shaped) irregular blade patterns.

Part 3: The Osafune School of Bizen

The Osafune school takes its name from the area where it was located. Started by a swordsmith named Mitsutada, this school rose to prominence in Bizen to rival the well-established Ichimonji school. Osafune swords are known for their dynamic designs, and favored by many samurai for the same reason. Irregular blade patterns like chōji and gunome (a pattern comprising alternating crests and peaks) designs are characteristic of swords made by this school.